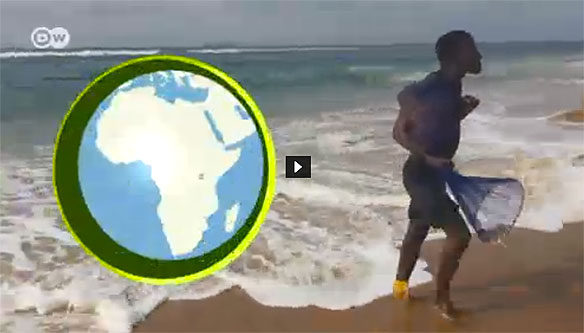 African countries are raising alarm because of their disappearing coastlines. Beaches erode mainly because of illegal sand mining. A Swiss foundation wants to help Togo restore its coastline…

Closure Of Illegal Beach Sand Quarries, Togo; Lome (01-24-2014)
The Togolese Minister of Mines, Noupokou Dammipi, said that the recent decision by the Government to close down 90% of the illegal sand quarries, was justified by reasons pertaining to environmental protection…

The Market For African Beach Sand: Who’s Buying, Selling And Mining It?, AFK Insider (02-17-2017)
Sand mining on beaches and in riverbeds is a source of income for unemployed Africans, but it’s often an unregulated — or under-regulated — business. Environmental impact is a growing concern…

Sand, Rarer Than One Thinks: A UNEP report (GEA-March 2014)
Despite the colossal quantities of sand and gravel being used, our increasing dependence on them and the significant impact that their extraction has on the environment, this issue has been mostly ignored by policy makers and remains largely unknown by the general public.
In March 2014 The United Nations released its first Report about sand mining: “Sand, Rarer Than One Thinks.”
“Sand Wars” film documentary by Denis Delestrac – first broadcasted on the european Arte Channel, May 28th, 2013 in its french version: “Le Sable: enquête sur une disparition”, where it became the highest rated documentary for 2013 – expressly inspired the United Nations Environment Programme (UNEP) to publish this 2014-Global Environmental Alert.

Sand Wars, An Investigation Documentary, By Award-Winning Filmmaker Denis Delestrac (©-2013)
As of 2011-2012, when investigative filmmaker Denis Delestrac and team, were first collecting and unveiling unpublished sand mining datas and information from the professionals involved, the Sand business was estimated to be a $70 billion industry, worldwide…!—Denis Delestrac (©-2013)
“Sand is the second most consumed natural resource, after water. The construction-building industry is by far the largest consumer of this finite resource. The traditional building of one average-sized house requires 200 tons of sand; a hospital requires 3,000 tons of sand; each kilometer of highway built requires 30,000 tons of sand… A nuclear plant, a staggering 12 million tons of sand…”