The Economist explains: Why there is a shortage of sand 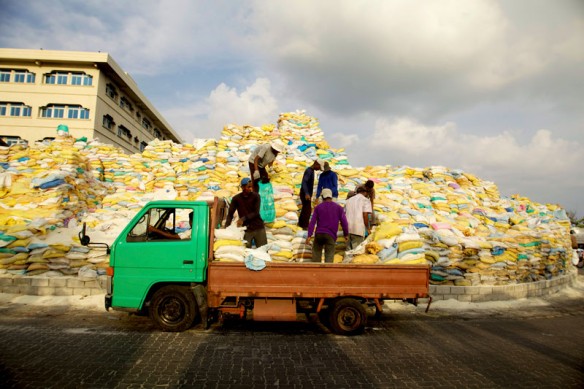 Bagged beach sand, extracted from the Indian Ocean’s nearshore floor, Maldives.
As of 2011-2012, when investigative filmmaker Denis Delestrac and team, were first collecting and unveiling sand mining datas and information from the professionals involved, the Sand business was estimated to be a $70 billion industry, worldwide…!—Denis Delestrac (©-2013)
“Sand is the second most consumed natural resource, after water. The construction-building industry is by far the largest consumer of this finite resource. The traditional building of one average-sized house requires 200 tons of sand; a hospital requires 3,000 tons of sand; each kilometer of highway built requires 30,000 tons of sand… A nuclear plant, a staggering 12 million tons of sand…” Captions and Photograph by: “Sand Wars” Multi Award-Winning Filmmaker Denis Delestrac (©-2013).

It may be plentiful, but so is the demand for it…

Why Sand Is Disappearing ; By John R. Gillis Professor Emeritus of History, Rutgers University (12-04-2014)
To those of us who visit beaches only in summer, they seem as permanent a part of our natural heritage as the Rocky Mountains and the Great Lakes. But shore dwellers know differently. Beaches are the most transitory of landscapes, and sand beaches the most vulnerable of all…