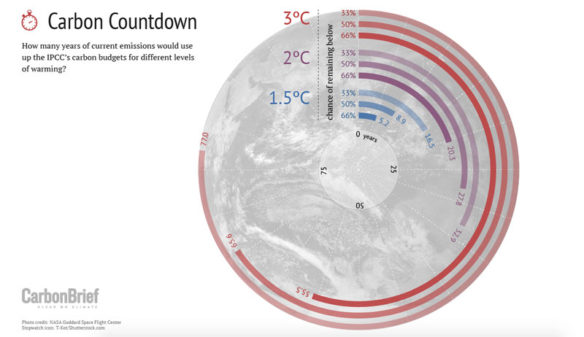 Animation:How our time left to use up the IPCC’s carbon budgets has changed since 1992; By Carbon Brief.

In its most recent synthesis report, published in early 2014, the Intergovernmental Panel on Climate Change (IPCC) laid out estimates of how much CO2 we can emit and still keep global average temperature rise to no more than 1.5C, 2C or 3C above pre-industrial levels.

That same year, Carbon Brief used these estimates to calculate how many years of current emissions were left before blowing these budgets.

Updating this analysis for 2016, our figures suggest that just five years of CO2 emissions at current levels would be enough to use up the carbon budget for a good chance – a 66% probability – of keeping global temperature rise below 1.5C.

The IPCC estimates carbon budgets for 1.5C, 2C and 3C. For each temperature limit there are three budgets.
The first gives a 66% probability of staying below the given temperature, the second a 50% chance, and the last a 33% chance.

Read Full Article: Trump bailing on the the Paris Agreement would be catastrophic for the future; CNN (05-31-2016)
If the United States bails on the Paris Agreement on climate change, as CNN is reporting, the results could be catastrophic both for this country and the planet. The worst part: There is absolutely no reason for it. Aside, perhaps, from bravado and arrogance…