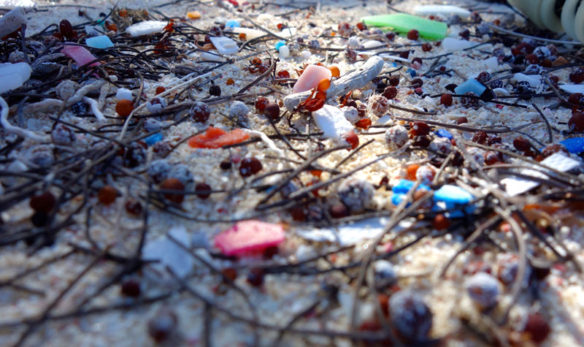 Scientists have long known that marine animals mistakenly eat plastic debris because the tiny bits of floating plastic might look like prey.

But a new Duke University study of plastic ingestion by corals suggests there may be an additional reason for the potentially harmful behavior. Visual cues, such as a resemblance to prey, don’t factor into the appeal, the researchers noted, because corals have no eyes.

Corals in our experiments ate all types of plastics but preferred unfouled microplastics by a threefold difference over microplastics covered in bacteria,” said Austin S. Allen, a PhD student at Duke’s Nicholas School of the Environment. “This suggests the plastic itself contains something that makes it tasty.”

60% of Loggerhead Turtles Stranded on Beaches in South Africa Had Ingested Plastic; EcoWatch (05-031-2016)

“Midway.” A Love Story for our Time from the Heart of the Pacific”—By Chris Jordan, Midway Film; (04-01-2015)
A shocking film from Midway Island in the North Pacific Ocean, by Midway Film.