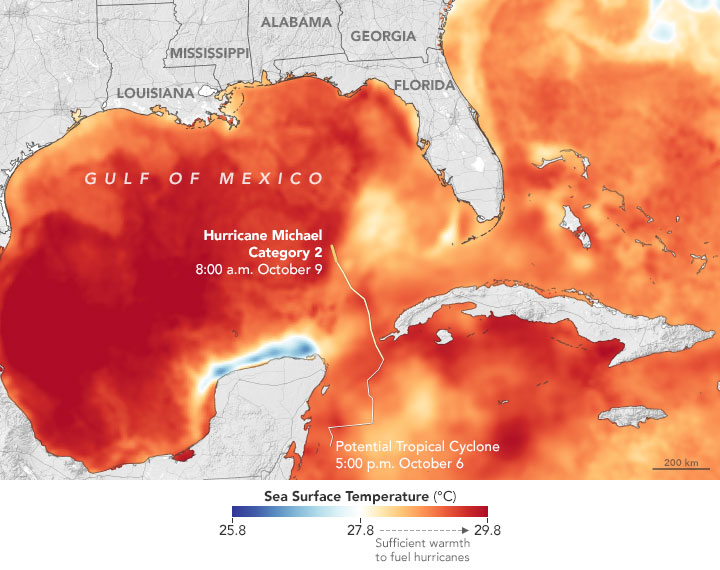 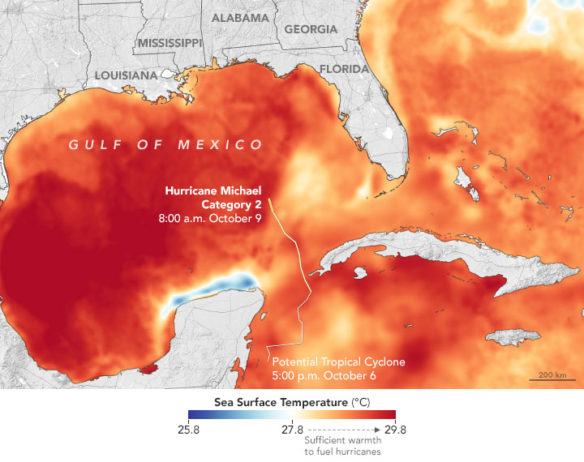 National Hurricane Center forecasters expect the storm to make landfall in the Florida Panhandle or Big Bend region around midday on October 10. This area has faced relatively few hurricanes in the past, at least for the U.S. state that sees more landfalling hurricanes than any other.“Michael’s projected intensity at landfall is currently category 3, which is worrisome because many people living in the Panhandle have little or no experience with storms this intense.” Captions and Image Source: NASA

One-fourth of beachfront could be inundated by large storm waves, experts predict.

Hurricane Michael, which is forecast to make landfall Wednesday as a Category Three hurricane, is very likely to cause erosion at the base of sand dunes along about three-fourths of the Florida Panhandle beaches, and to inundate more than one-fourth of that coast’s dunes, causing flooding behind the protective dune line, according to coastal change experts at the U.S. Geological Survey.

If the hurricane, which was a Category Two early Tuesday, intensifies and stays on the course forecast by the National Hurricane Center, storm surge impacts are likely to be most severe in the Panhandle region east of the eye, where surge- and wave-induced water levels could rise 16 to 20 feet, the USGS predicted.

In west Florida, the beaches of Pinellas and Manatee counties are also vulnerable to beach erosion. About four-fifths of that area’s beaches are very likely to encounter erosion at the base of the dune. But dune inundation is predicted to be less extensive along the state’s west coast. About one-sixth of Alabama’s beaches are also very likely to be eroded by storm waves from the hurricane.

In the open Gulf of Mexico, Hurricane Michael’s wave heights are predicted to be as much as 40 feet, said research oceanographer Kara Doran, leader of the USGS Coastal Change Hazards Storm Team based in St. Petersburg, Florida.

“As the storm approaches the coast, the shallow sea bed will reduce that wave height,” Dorn said. “But water levels in some parts of the Northeast Florida coast will still be high enough to overwhelm the dunes, which are relatively low and narrow.” 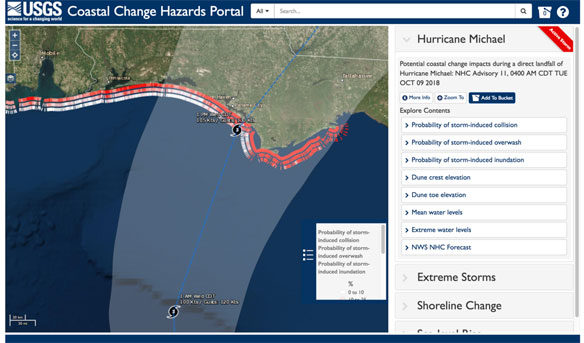 Of particular concern, Doran said, is the region from Cape San Blas to St. George, an area of beach communities and state parks, where total water levels are forecast to be 16 to 20 feet above normal. If the hurricane forecast holds true, the likelihood that the dunes will be inundated there is more than 95 percent, Doran said. Further west, the Florida portion of Gulf Islands National Seashore near Santa Rosa has at least a 70 percent chance that the dunes will be overtopped by storm waters, Doran said.

The prediction of Michael’s effects at landfall are based on results of the USGS Coastal Change Forecast model, which has been in use since 2011, and is continually being improved. The Coastal Change Forecast model starts with the National Hurricane Center’s storm surge predictions and National Oceanic and Atmospheric Administration wave forecast models as input. The USGS model then adds detailed information about the forecasted landfall region’s beach slope and dune height to predict how high waves and surge will move up the beach, and whether the protective dunes will be overtopped. The forecasts are available at high resolution for all the areas likely to be affected by storm-tides from Hurricane Michael.

Overall, it is very likely that hurricane storm surge will cause erosion at the base of the dune line on 75 percent of Florida’s Gulf Coast beaches.

Beach erosion is only the first level of damage a major storm can cause. As waves and surge reach higher than the top of the dune, overwash occurs, often transporting large amounts of sand across coastal environments, depositing sand inland and causing significant changes to the landscape. Overwash is currently predicted as very likely for 43 percent of Florida Panhandle beaches, 17 percent of Pinellas and Manatee County beaches. Overall, 38 percent of Florida Gulf beaches and two percent of Alabama beaches are forecast to encounter overwash.

Inundation, the most severe impact, occurs when beaches and dunes are completely and continuously submerged by surge. Inundation is forecast as very likely for 27 percent of the Florida Panhandle and 17 percent of Pinellas and Manatee counties, with overall inundation very likely on 22 percent of all Florida beaches and none of Alabama’s.

The public can view a real-time map of these estimates on the USGS’ Coastal Change Hazards Portal. Emergency managers can use the coastal change forecast to help identify locations where coastal impacts might be the most severe, such as where roads will be overwashed by sand or where it’s roads might go underwater because of storm surge and large waves.