Photo: Encounter with an illegal sand miner, Mumbai. As of 2011-2012, when investigative filmmaker Denis Delestrac and team, were first collecting and unveiling unpublished sand mining datas and information from the professionals involved, the Sand business was estimated to be a $70 billion industry, worldwide…!—Denis Delestrac (©-2013)

“Sand is the second most consumed natural resource, after water. The construction-building industry is by far the largest consumer of this finite resource. The traditional building of one average-sized house requires 200 tons of sand; a hospital requires 3,000 tons of sand; each kilometer of highway built requires 30,000 tons of sand… A nuclear plant, a staggering 12 million tons of sand…” Captions and Photograph by: “Sand Wars” Multi Award-Winning Filmmaker Denis Delestrac (©-2013).

The recent killing of a reporter in India’s Uttar Pradesh state has exposed the dangers for journalists covering illegal sand mining and construction in the country.

The sand mining industry is laden with corruption, and this puts journalists who cover the topic at an increased danger…

Sand mafias silence journalists in India; News24 (06-21-2019)
Up to 50 billion metric tons of sand and gravel are extracted every year worldwide. The inexhaustible need for sand from this rapidly-developing country is the breeding ground for illegal activities by what has come to be known as the “sand mafias”…

Support pours in for woman journalist being harassed by sand mining mafia, India; Times Of India (03-21-2017)
Students, IT professionals and activists have pledged to stand by independent journalist Sandhya Ravishankar who is under attack for writing a series of articles on alleged illegal beach sand mining…

Demand for sand: the largest mining industry no one talks about; Inhabitat (05-23-2019)
The world’s largest and perhaps most destructive mining industry is rarely discussed. Approximately 85 percent of all material mined from the earth is a simple and widely available resource: sand. Because it is so cheap and readily available, it is mined by everyone from guy with a shovel, to multi-million dollar machine operations… 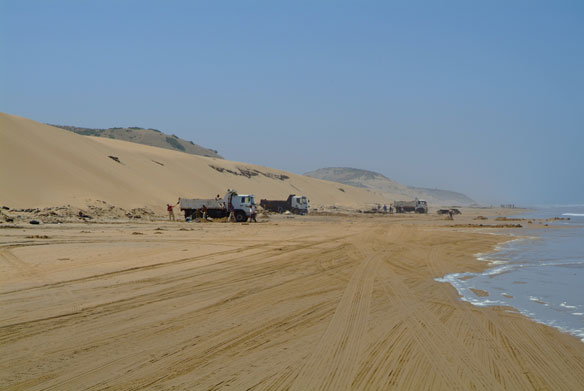