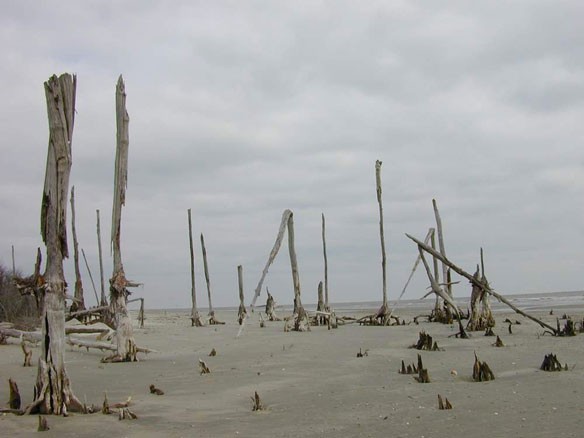 The prime example of beach evolution is the coastal barrier. These strips of land are usually long and narrow and run parallel to the mainland. Sometimes they are islands and other times they are connected to land at one end, a feature dubbed a “spit.” Scientists estimate that there are more than 2,100 barrier islands in the world fronting nearly 10 percent of continental shorelines. In the United States, barrier spits and beaches line up along nearly a quarter of the coast, mostly facing the Atlantic Ocean and Gulf of Mexico. Some of the best-known barrier systems include Padre Island in Texas, the Outer Banks of North Carolina and Virginia, the south shore of Long Island, New York, and the Sea Islands of South Carolina and Georgia. Captions and image source: NASA / Earth Observatory.Photo source: ©© Hunter Desportes

Developers are hoping to build an about $100 million high-end getaway on Bay Point Island, which is just northeast of Hilton Head…

As SC island homes fall into ocean, owners behind them wonder if they’re next, Post and Courier (02-01-2020)

Sea rise along South Carolina coast accelerating faster than realized, researcher says; Post And Courier (02-01-2019)
Within 50 years, the sea off Charleston will be rising about one inch every five years — twice as fast as it was rising about a century ago and one-third faster than it was in 2000…