The crisis is real. The locations are known. If we don’t act, who will save our beaches?
—Coastal Care

Beach sand mining is happening all over the world. Since 2007, it has gained media attention in Morocco, India, South Africa, Benin, Liberia, Grenada, Jamaica, Malaysia, and Indonesia. Beach sand mining has also been documented in Mexico, Canada, and Australia and is happening in numerous additional countries right now. The legality of beach sand mining varies from country to country and it is illegal in many, but the value of sand on beaches is clear.

Beach sand is the first defense coastal communities have against storm impacts, which are becoming more severe and more costly in both dollars and lives as a result of increasing beach development. Almost 60% of the world’s population lives on 10% of the land on the planet: on the coast. Sand is being mined from beaches for use in concrete to support the boom in coastal construction. Sand is also being exported from beaches with less development to beaches with more development, usually to replace sand that has eroded. 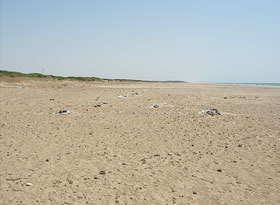 A large dune field was removed from this beach in northern Morocco making the back dune area prone to storms. The beach has been reduced to bedrock. Photo: Program for the Study of Developed Shorelines
Erosion caused by sand mining threatens to wash away this road to the airport in Kerala, India.
Sand mining in Benin.
Large sand pit where dunes are being removed in northern Morocco.

Coastal erosion is also increasing in most areas, much of it induced by alterations to the natural beach. Barrier islands are eroding in many parts of the world and sea level rise is probably the major factor contributing to accelerated erosion. The 2007 Nobel Prize winning Intergovernmental Panel on Climate Change commissioned by the United Nations estimates the current rate of sea level rise to be 3 millimeters per year. With higher sea levels, not only will storms cause destructive erosion, but flooding from simple high tides with on-shore winds will occur with greater frequency.

Additionally, natural beach sand is the foundation for a functional ecosystem. Without sand, plants can not grow. Without plants, animals can not find food and make homes. Without vegetation, the shifting sands have little hope of becoming stabilized.

Beach sand mining must end or we will systematically destroy our planet’s beaches. This petition will be sent to leaders of various countries and also to the United Nations Environment Programme.

After decades of observation, the situation is clear.
—Coastal Care

After decades of observation, the situation is clear.

North Carolina law prohibits the use of groins – steel, rock or wood walls built perpendicular to the beach in order to trap shifting sand – and other permanent erosion control structures along ocean shorelines.

This North Carolina law is progressive with regard to the United States and the world and was implemented in 1995 thanks to coastal scientists in the state, but the ban is threatened frequently. Each year, the ban is attempted to be overturned by politicians catering to special interest groups – wealthy home owners and private communities. 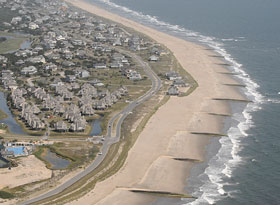 These hardened beach structures on the North Carolina shore were built before the passage of the current ban. Lifting the ban would permit jetties like these pictured above on North Carolina beaches. Photo: Program for the Study of Developed Shorelines
This aerial view of the metal wall at the Cape Hatteras Lighthouse shows accelerated erosion of the shore at the top of the photo as a result of the wall. The irony is that the wall built to “protect” the beach has caused accelerated erosion.
This rock jetty has caused accelerated erosion on the right side of the photo.

Overturning the ban would be a major step backwards in the fight for natural beaches, public access to beaches, and ensuring what is best for the future of the beaches of North Carolina. People living in areas experiencing erosion sometimes think that the use of hardened beach structures at their beach is justified. But why is their beach more important than the beaches that will erode as a result of the hardened beach structures?

The ban is based on:

The following comments argue against permitting this exception to our state’s long-standing, hard structure ban from a scientific perspective: