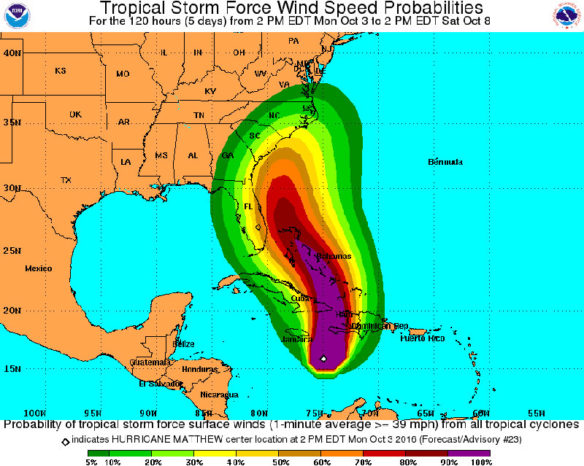 Category 4 Hurricane Matthew on Monday afternoon was just hours away from delivering what might be a catastrophic blow to Haiti. There hasn’t been a storm this strong to hit the country since 1954… 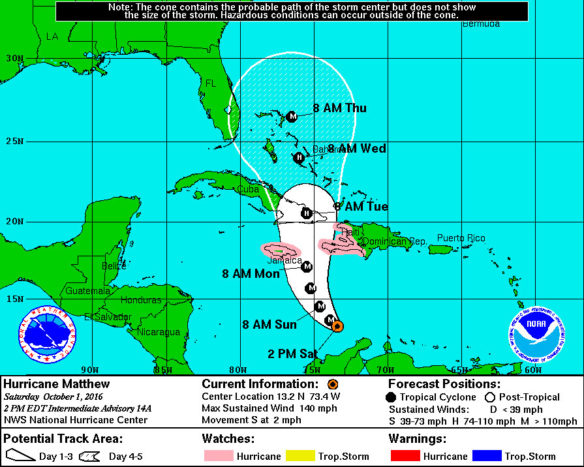 Matthew is a Category 4 hurricane, in the central Caribbean Sea after weakening from a Category 5 overnight. A hurricane watch is now in effect for coastal areas of Haiti. The storm poses a danger to Jamaica, parts of Hispañola, eastern Cuba and the Bahamas early next week… 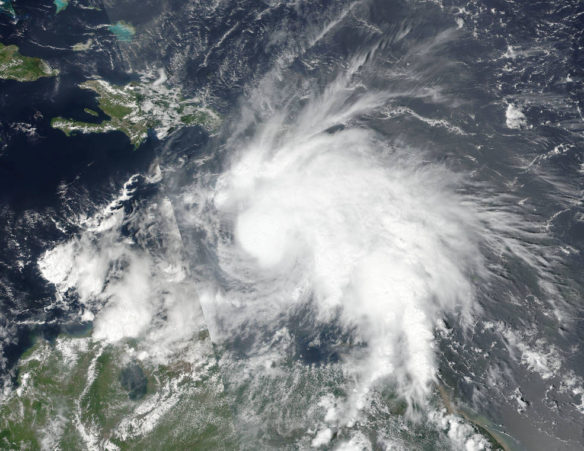 Hurricane Matthew has strengthened to a Category 3 storm in the Caribbean Sea, according to the Friday morning (Sept. 30) update from the National Hurricane Center. The storm is about 105 miles northeast of Punta Gallinas, Colombia, and 495 miles southeast of Kingston, Jamaica… 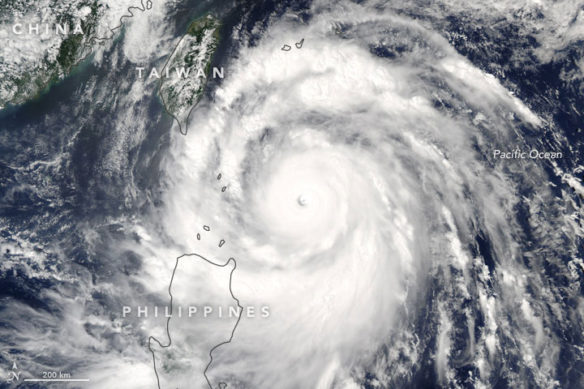 As Super Typhoon Meranti roars toward Taiwan and mainland China, officials and residents are preparing for the worst of the storm, which has become the most powerful of 2016…

Super Typhoon Meranti; NASA / Earth Observatory (09-14-2016)
Forecasters expect the storm to skirt the southern tip of Taiwan in the morning hours of September 14. The U.S. Navy’s Joint Typhoon Warning Center (JTWC) predicts maximum open-ocean waves of 48 feet and sustained winds of 150 knots (173 miles per hour), with gusts up to 180 knots (207 mph) as Mernati passes Taiwan. While the eye of the storm won’t hit Taiwan directly, the island will take the brunt of the right side of the storm… 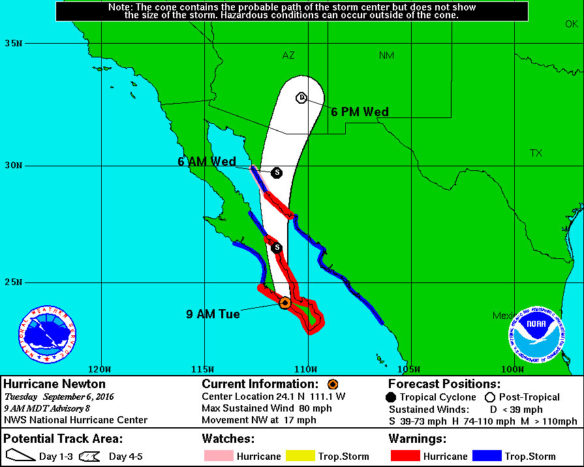 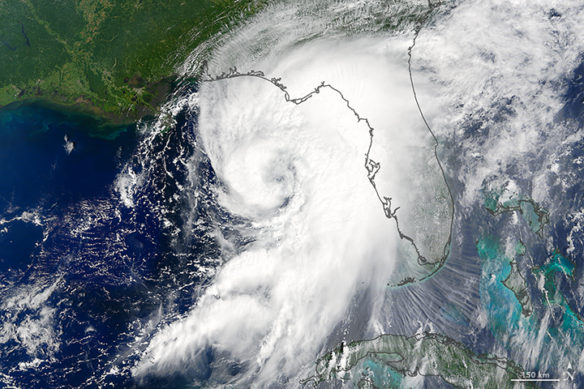 Hermine made landfall at 1:30 a.m. this morning, becoming the first hurricane to hit Florida in 11 years.

In addition to the hurricane-force winds, forecasters said, the storm could bring “life-threatening inundation within the next 12 to 24 hours along the Gulf coast of Florida…” 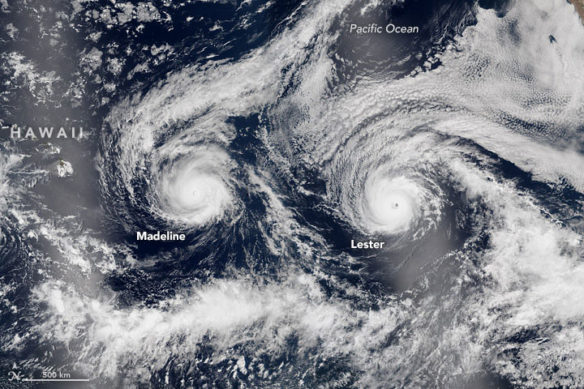 Hurricanes Madeline and Lester.The island of Hawaii rarely takes a direct hit from a hurricane. This week, two Pacific storms are lining up to change that. Captions and image source: NASA / Earth Observatory

The island of Hawaii rarely takes a direct hit from a hurricane. This week, two Pacific storms are lining up to change that.

Meanwhile, in the Atlantic, Tropical Depression 9 has strengthened to become Tropical Storm Hermine, with a hurricane watch in effect for parts of Florida from just east of Apalachicola to north of Tampa…

Hurricanes Madeline and Lester, NASA / Earth Observatory (08-31-2016)
As of 5 a.m. (Hawaii time) on August 31, forecasters were predicting that Hurricane Madeline would pass just south of Hawaii as a category 1 storm in the evening on August 31. “This track will take the center of Madeline dangerously close to the Big Island of Hawaii late Wednesday and Thursday,” the forecasters at the Central Pacific Hurricane Center wrote. “Given its close approach and uncertainty in the track forecast, a Hurricane Warning has been issued for the Big Island of Hawaii.” Predictions call for 5 to 15 inches of rain over wide areas, raising the risk of flash floods and mudslides. Surf could reach 15 to 25 feet… 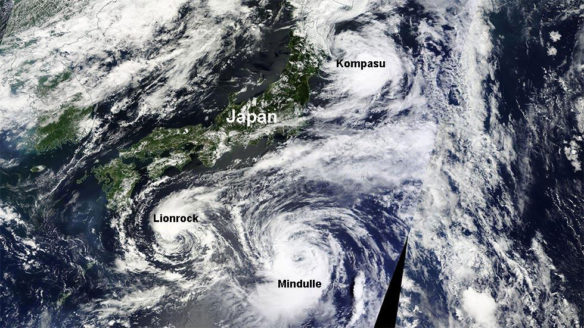 NASA satellite image of the three tropical storms near Japan on Sunday.

Satellite imagery this weekend showed an interesting sight near Japan as a trio of tropical systems spun near the country. One of those three systems, Mindulle, made landfall near Tokyo as a typhoon on Monday… 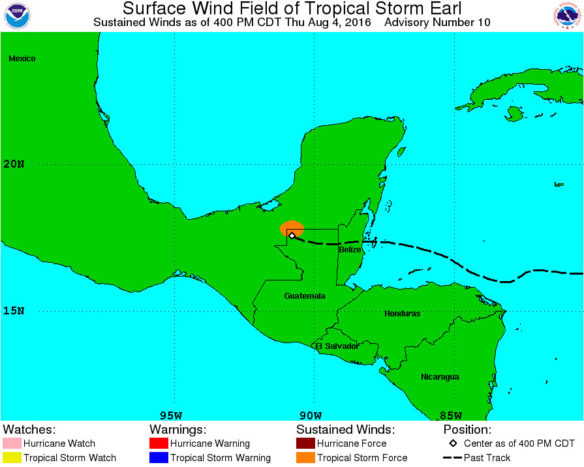 Packing winds of up to eighty-miles-per-hour, Tropical Storm Earl hit the coast of Belize on Thursday morning, downing trees and cutting power and while forecasters say it is expected to weaken, heavy rains are likely through Friday…