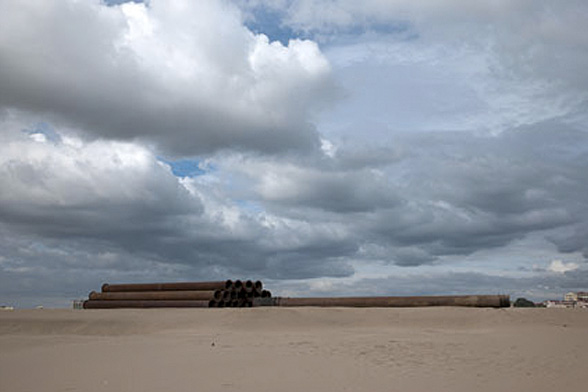 Phnom Penh (Cambodia). 30/12/2008: Pipes used for the filling of Boeung Kak lake with sand dredged from the Mekong.

By Corinne Callebaut and Ros Dina

Since Singapore was banned from mining sand in Indonesia, the city-state – which surface area covers less than 650 km2 – is struggling to fiand the sand it needs for its gigantic land reclamation and construction projects. As a result, it turned to a much less discriminating country, where the buying cost of sand remains quite inexpensive, Cambodia. For the last year, the provinces of Koh Kong and Kandal have seen a heavy traffic of boats, which sometimes arrive in dozens to dredge the seabed or dig along the coasts to collect as much sand as possible and export it to Singapore. There, companies will sell it for as much as four times the initial price, according to environmentalist NGO Global Witness, who also points at the lack of transparency around this market. Something that stirs greed but also worries marine conservation organisations, who fear the impact of the intensive exploitation. Justifiably so, as villagers have already complained with the authorities after the resulting collapse of their houses.

Dredgers Lured By the Sand

Koh Kong is known for its lush nature and hilly jungle, but the coastal province has also become a heaven… for dredgers, which are characterised by their imposing iron structure. For a few months, large boats coming to dredge the seabed have approached the shores of the province. Their goal: to fill up their barge with hundreds of tonnes of sand. Does the Cambodian rock dust possess any property ignored by all until recently? Actually, as Singapore has felt a little too cramped in its 647 km2 territory, it has urgently looked for great quantities of sand, an essential component of concrete.

As the city-state had long exhausted its own supplies of sand, neighbouring Indonesia was its main supplier for many years. But in February 2007, the latter put an end to sand exports towards Singapore by imposing a ban that is still in force, as the relationship between Singapore and Indonesia remains conflicting. The reason: the intensive dredging by the smallest nation in Southeast Asia has reportedly resulted in the archipelago losing several islands, that were literally devoured by excavators. Authorities even expressed fear that the losses may jeopardise their territorial sovereignty. “Sand mining had caused very severe environmental damage in Indonesia, including in the islands of Sebayik and Nipah,” Desra Percaya, spokesperson of Indonesian Foreign Ministry, had then declared in Indonesian daily Jakarta Post.

Losing its main supplier, Singapore had worried about the higher cost of importing sand if it had to find other suppliers somewhere else and even forecast an increase by 3% of the price in relation to Indonesian sand. In their search for inexpensive sand, the barges of sand companies eventually dropped anchor off the coasts of Cambodia. The Kingdom offers not only unbeatable prices but also comparatively favourable conditions.

In its report entiteld “Country for Sale ” made public on Thursday February 5th, Global Witness, an NGO specialised in monitoring natural resource management and campaigning on human rights, devotes three pages to the opacity which it says surrounds the trade of sand in Cambodia. Several witnesses interrogated by the organisation have thus reported that many ships belonging to Chinese, Korean or Taiwanese companies, came to purchase sand off the coasts of Koh Kong province, with the intention for all to export it to Singapore. The organisation spoke to workers who reportedly claimed that documents, contracts and payments were all directed to the office of Ly Yong Phat, a Senator affiliated with the ruling party CPP who dominates business enterprise in the province and is often criticised by human rights organisations for the forced evictions of residents from the many lands he has acquired.

“I completely refute the allegations from Global Witness,” Ly Yong Phat replied in a telephone interview to Ka-set. “The government has granted me this concession for sand mining, so it is normal that I am the referee. Besides, I am not the only one responsible, there is also another person. I am in charge of the area of Koh Pao and Svay Ambel rivers, and since I started to be in charge of the mining, floods have stopped happening. I even denied authorisation to a Thai company because there was not enough sand… I think exports in the province do not exceed 4,000 tonnes a month.”

Also contacted by Ka-set, Pech Siyon, head of the industry office in Koh Kong, estimates the quantity of sand dredged around Koh Kong province to be between 7,000 and 8,000 tonnes a week. “Three companies have been authorised to mine sand for about one year: Ly Yong Phat Group Company [owned by the above-mentioned Senator], Odom Cement Company Ltd and Dani Trading. Each exploits specific zones,” he explains. “Apart from these companies, no one else has the right to mine sand. Some do it but under the direction of the three companies who have received official approval.”

Global Witness estimates that nearly 15,000 tonnes of sand are exported each week… which would mean an annual revenue of 8.6 million dollars for the sand industry in Koh Kong province.

In addition to the lack of transparency over this market, another source of concern exists: the risk that the intensive pumping might endanger deep-sea ecosystems. Following the example of the disappearance and collapse of islands in Indonesia, Cambodia unfortunately seems to also suffer from the intensive sand dredging.

For example, inland, despite the bans from the Ministry of Industry, Mines and Energy, many ships have come to extract sand in tributaries of the Tonle Bassac, in the area of Takhmau, in Kandal province. Yet, many villagers have complained with authorities that their house and land started to collapse, which had never happened before. According to a member of an NGO very active on environmental issues related to the Tonle Bassac, who prefers to speak anonymously, “the dredging has become intensive for some time. It is mobile dredging, boats are constantly moving from one place to another. It is completely illegal, but in spite of many promises, the government does not seem very active in fighting these activities.”

For his part, a worker of another environmental organisation, who also prefers to speak under anonymity, worries about the possible impact of intensive sand dredging on the seabed. “For now, we have not observed a direct impact on deep-sea ecosystems. However, we remain very concerned with the potential consequences it could have on the fragile marine life – on sea horses for example or on all the benthic species, like lichen or algae.” Echoing these words, the OSPAR Commission – in charge of implementing the current legal instrument guiding international cooperation on the protection of the marine environment of the North-East Atlantic – has precisely insisted in its recommendations on the potential impact of sand dredging in marine environment. “All dredged materials have a significant physical impact at the point of disposal. This impact includes covering of the seabed and local increases in suspended solids levels. (…) Biological consequences of these physical impacts include smothering of benthic organisms in the dumping area.”

Yet, the conservationist believes in a solution that would enable Cambodia to continue benefiting from sand extraction while protecting nature. “Every company involved in the extractive industry or likely to have an impact on environment should contribute a sum of money – some kind of tax – as compensation. Thanks to this tax, the government could fund marine conservation projects and help Cambodian people,” he argues. Utopian? Possibly, but at least, he is not lulled by the sandmen operating in Cambodia.

Taken from the original article.