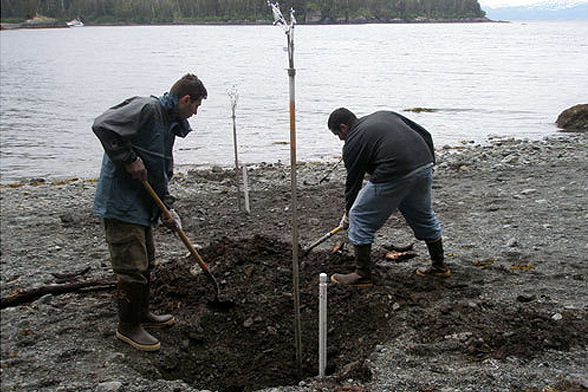 ANCHORAGE, Alaska (AP) – An engineering professor has figured out why oil remains trapped along miles of gravel beaches more than 20 years after the Exxon Valdez tanker disaster in Prince William Sound.

An estimated 20,000 gallons of crude remain in Prince William Sound, even though oil remaining after the nearly 11-million-gallon spill had been expected to biodegrade and wash away within a few years.

The problem: The gravelly beaches of Prince William Sound are trapping the oil between two layers of rock, with larger rocks on top and finer gravel underneath, according to Michel C. Boufadel, chairman of the Department of Civil and Environmental Engineering at Temple University. His study appeared Sunday in Nature Geoscience’s online publication and will be published in the journal later.

Boufadel found that water, which could have broken up and dissipated the oil, moved through the lower level of gravel up to 1,000 times slower than the top level.

Once the oil entered the lower level, conditions were right to keep it there, he said. Tidal forces worked to compact the finer-grained gravel even more, creating a nearly oxygen-free environment with low nutrient levels that slowed the ability of the oil to biodegrade.

“The oil could be maybe one foot below the beach surface and in contact with sea water with a lot of oxygen, but the oxygen doesn’t get to it,” Boufadel said.

Boufadel said the study points out the susceptibility of beaches worldwide to long-term oil contamination, especially at higher latitudes where beaches tend to be gravel or a mixture of sand and gravel.

“As global warming is melting the ice cover and exposing the Arctic to oil exploitation and shipping through sea routes such as the Northwest Passage, the risk of oil spills on gravel beaches in high-latitude regions will be increased,” the study says.

Boufadel and his team dug about 70 pits between 3-feet and 5-feet deep on six beaches during summers from 2007 to 2009. His report focuses on data collected on Eleanor Island, about 15 miles away from Bligh Reef where the Exxon Valdez grounded on March 24, 1989.

Peter Hagen, program manager for Exxon studies for the National Oceanic and Atmospheric Administration, said Boufadel’s study is a continuation of previous work that began in 2001 when 9,000 pits were dug around the sound, confirming the presence of oil.

While the remaining oil likely remains somewhat locked up in the beaches, the spill’s lingering effects are ongoing, Hagen said. Sea otters, sea ducks and some sea birds are producing an enzyme showing exposure to oil.

Boufadel’s study was funded by a $1.2 million, three-year grant from the Exxon Valdez Oil Spill Trustee Council. The council was formed after the environmental disaster to oversee restoration of the sound.

Boufadel doesn’t know how long it might take for the remaining oil to finally disappear but predicted it will take a long time.

“It will be a slow process because the oil is relatively sheltered from water motion,” he said.