Preserving the health of the Rio de la Plata 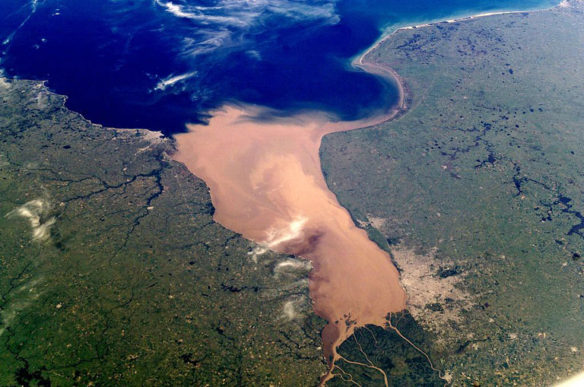 NASA astronaut photograph of the Río de la Plata estuary looking west-east. Greater Buenos Aires on the right side of the picture, and Montevideo on the left side. Image source: NASA / Earth Observatory

An ambitious multi-disciplinary “virtual institution,” set up by researchers from Uruguay and Canada, is improving the management and conservation of the 300 kilometre-wide Rio de la Plata, South America’s largest estuary.

“It’s not enough to study sand mining, document where it has happened, and show how it adversely affects the community,” says Dr Robert Fournier, professor of oceanography at Dalhousie University in Halifax, Nova Scotia. “You need to stop it from happening by proposing policies and regulations that say ‘You cannot mine sand on the beaches of Uruguay any more’.”

Ten years of collaborative research by Uruguayan and Canadian researchers on the Rio de la Plata estuary may lead to just those kinds of decisions to preserve the estuary and conserve its valuable resources. The results to date — a wealth of data on many aspects of the river system and coast — have led to the creation of a multistakeholder commission to addresss the region’s problems. In the process, a valuable collaborative network has emerged.

A river system in peril

The Rio de la Plata estuary — the widest in the world — originates at the junction of the Uruguay and Parana rivers. Its watershed begins in central Brazil, at the divide between the Amazon and the Rio de la Plata basins. On its 1,000 kilometre journey to the sea, the Rio de la Plata collects water from many rivers that flow from the highlands of Brazil, Northern Argentina, the south of Brazil, and Paraguay. Before emptying into the Atlantic, the river passes by Montevideo (population 1.5 million), the resort city of Punta del Este (population 500,000 at peak vacation period) on the northern coast, and Buenos Aires (population 13 million) on its southern boundary.

A wide range of aquatic species thrive in the estuary which separates Uruguay and Argentina, making the Rio de la Plata system the main fishing grounds for both artisanal fishers and an inshore industrial fleet.

But the estuary faces many complex problems. Close to 70 percent of Uruguay’s 3.3 million people, for instance, live within 100 kilometres of the coast. Human activity creates marine pollution and accelerates beach and dune erosion. Deforestation and mechanized agriculture also cause soil erosion, which leads to sedimentation. In addition, inappropriate sand mining techniques contribute to coastal degradation. Fisheries are also being rapidly depleted. Not surprisingly, the ecosystem’s deterioration is affecting both local populations and the tourism industry.

Canada began to take an interest in the Rio de la Plata in 1991 when, during a state visit to Canada, Uruguayan President Louis Lacalle signed a memorandum of understanding with Dalhousie University. Drawing on this agreement, President Lacalle proposed a “university of the sea” at Punta del Este.

After visiting Uruguay in 1992, however, Dr Fournier and Anthony Tillett, of Dalhousie’s Lester B. Pearson International Institute, had a different idea: to create a “virtual institution” that would bring together Canadian and Uruguayan agencies to identify and address coastal zone problems. Two years later, the International Development Research Centre (IDRC) launched the Integrated Coastal Zone Management of the Rio de la Plata Support Program, which has become known as the EcoPlata project.

A first investigation focused on how environmental factors and human activities affect the spawning and nursery grounds of the “white croaker” or corvina, an important species for both artisanal and commercial fisheries. The corvina accounts for about 14 percent of the total catch in the estuary, but fishing yields have been dropping in recent years.

“This was a key cross-cutting issue,” says Dr Fournier. “It allowed physicists, chemists, biologists, geologists, and so forth to work together on the same question: what is it about sediments, about pollutants, about water circulation that influences the croaker and has a long-term effect on its success?”

While this effort generated a number of valuable studies, it also proved that the participating institutions could work effectively as a team. The result? In 1997, when the EcoPlata initiative was renewed, both its scope and level of financial support expanded significantly.

The broader EcoPlata project is pursuing a number of approaches examining the perspectives for sustainably developing the estuary. These include:

In the four years since this initiative was launched, researchers have initiated a variety of activities. They began by assessing the Uruguayan side of the estuary. Using the data obtained, they developed a geographic information system to help with planning. The project identified three pilot sites, which enabled the team to focus its energies on areas with high potential, and then replicate results elsewhere.

Researchers also monitored trends — temperature, tides, salinity, and nutrient content, as well as water contamination, pressure on resources, beach erosion, and solid waste on the beaches. Ultimately, the team addressed some of the more critical issues, including the need to protect coastal areas through the creation of parkland, and to reduce the impact of solid waste pollution around communities without access to adequate sanitation services.

The Uruguayan government has committed CAN$430,000 to continue EcoPlata over the next three years. According to Dr Fournier, one of the most important indicators of success will be how participants translate the research into effective policies. The thematic GIS-based maps on the coastal area, for example, address issues such as land cover, actual land use, infrastructure, agricultural output, industrial activities, services, demographic data, and artisanal fisheries. The team will use this data to propose policy guidelines for more sustainable practices.

As a result of this ongoing effort, the EcoPlata project has gained credibility with policymakers. This was clearly manifested in May 2001, when the Uruguayan government created a special commission to address the Rio de la Plata coastal zone. The commission brings together national and municipal authorities, as well as coastal police and tourism institutions. Given its growing stature and networking capacity, EcoPlata was appointed as the commission’s Technical Secretariat.

Paul Halpern is a science and environment writer based in Halifax, Nova Scotia.