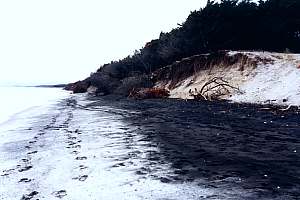 The erosion of dunes at a remote Northland beach and wildlife refuge is being blamed on dredges mining the near shore Mangawhai-Pakiri sand resource.

A year’s wave action on the exposed coast has eroded 28m at the base of the Mangawhai Spit despite a 20-year community conservation effort to restore one of the country’s few nesting sites for the endangered fairy tern.

“The erosion is huge and continuing,” said Mangawhai Harbour Restoration Society chairman Ray Welson. “It has not recovered after the July storms.”

The sea breached the spit 30 years ago. The society successfully fought to have sand mining off the spit stopped in 2004, but dredges operate to the south, off Pakiri Beach.

Mr Welson said erosion during the past 18 months north and south of Te Arai Pt threatened a pristine area, the stability of the restored sandspit, Mangawhai Harbour and its waterfront community.

However, ARC environmental chair woman Dianne Glenn said officers considered the erosion was likely to be due to wave action in extreme storms in July 2007 and last year.

She said erosion along the beach was consistent with low beach levels recorded in the ARC’s surveys of other east coast beaches.

Mr Welson disagrees. “From vantage points along the coast, on a clear day, one can see the adverse erosive effects sand extraction continues to have on the shoreline.”

Pakiri sand was used to restore Kohimarama Beach in Auckland City. But the sand lost at Pakiri in a year was equivalent to 50 times the amount used for Kohimarama.

Mr Welson said the society was trying to rebuild the spit’s dune system. This year, it grew and then planted 10,000 pingao and spinifex on the toe of the spit to the beginning of the coastal forest.

“Within weeks, you see sand building up against them. But the sand must be able to build up on the foreshore in front to dissipate the energy of the waves.

“There’s not as much sand being deposited on the foreshore, because it’s being taken away, and we are getting more severe wave action and it’s washing these plants away.”

Mr Welson said the society believed persistent erosion was concealed by inadequate and outmoded monitoring of the dredging.

The annual report on monitoring up to April last year should have prompted the ARC to order an independent review of the mining consents.

In March, the ARC and Friends of Pakiri Beach will go to the High Court to challenge the Environment Court’s granting resource consents for near shore mining of Mangawhai-Pakiri. In 2006, that court extended Sea-Tow and McCallum Bros’ consents for a further 14 years.

It also preferred the monitoring proposal of the companies to one which the ARC said could better isolate the effects of mining.

The appeal rests on a lack of evidence to support the company’s claim there was more sand coming into the area than was going out.

Meanwhile, dredges have left the Pakiri area for the Christmas holiday period.