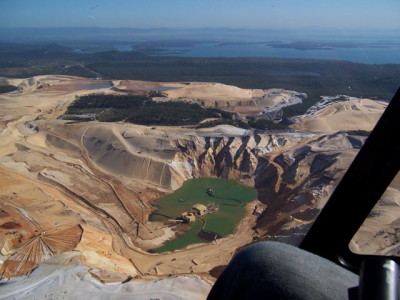 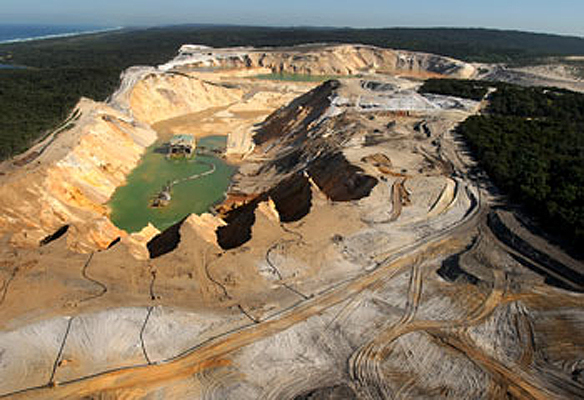 The sand mining company Unimin is calling for large areas of Stradbroke Island off Brisbane to be declared national park as soon as possible.

The company has mining leases over about 45 per cent of the island, off Brisbane.

Yet, mining will continue even if some parts of the island are declared national park…

During the 1960s sand mining operations began mining the islands frontal dunes.[citation needed] Mining moved into the interior of the island in the late 1960s and increased in scale and size. As an alternative, development of the island for seaside residential use was mooted and in 1970 a bridge from the mainland via Russell Island was under serious consideration by the Queensland government. The Queensland government also proposed a large scale redevelopment of the island in the mid 1980’s which would have seen the population of the island increase 10 fold. This proposal was never followed through when the incumbent government lost office. From the 1960s to the 1980s sand miners mined the frontal dunes of the ocean beach from Jumpinpin to Point Lookout. This mining activity destroyed numerous ancient Aboriginal middens and campsites in the sheltered areas behind the frontal dunes.[citation needed] Unique ecosystems which lay between the 18 Mile Swamp and the ocean were also destroyed. Generally there was little more than a token effort to re-vegetate mined areas so that 30 years after the area was mined the dunal areas are still ecologically devastated. There is also strong anecdotal evidence that in the 1960s one of the early mining companies destroyed a shipwreck located in the sand dunes near Jumpinpin which may have been the reputed Stradbroke Galleon.There are several accounts from sand mining employees of unusual artifacts being found during dredging operations.

However, the understanding of the island’s environmental and native heritage value was on the rise. In 1991 the Australian Government and sand mining companies ACI and Consolidated Rutile Pty Ltd attempted to reach an agreement on surrender of some or parts of mining lease tenements to form a national park. Half of North Stradbroke Island was to become a National Park in return for a guarantee that mining could continue for the life of several mines in high grade areas. The agreement was never signed by either of the mining companies nor the government and has not been progressed to this day. Mineral sands and silica sands at Myora Mine, near Dunwich, are currently being mined from the surface whilerutile, zircon and ilmenite are dredged from the Yarraman Mine on the north of the island and the Enterprise Mine on the south of the island by Consolidated Rutile Limited. In 2009 500,000 tonnes of minerals were being produced by mining about 50 million tonnes of sand. According to the Stradbroke Island Management Organisation (an environmental organisation) two-thirds of the island is covered by mining leases.