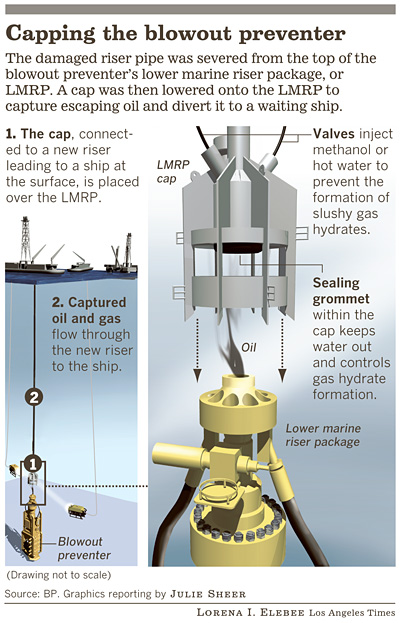 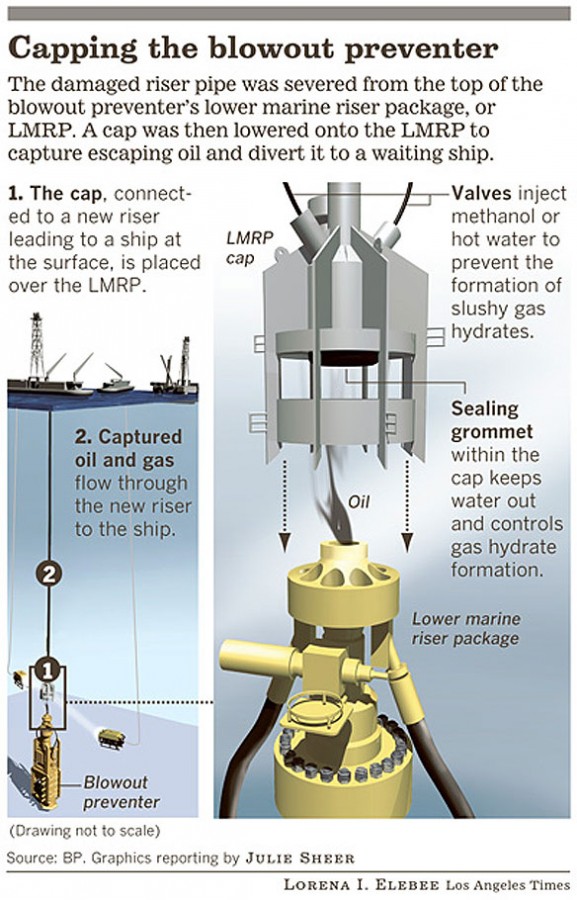 Efforts to contain the flood of oil into the Gulf of Mexico showed the first signs of progress as 6,000 barrels of oil were pumped to the surface after the fitting of a containment cap over the blown well, officials said Saturday, but it was an incremental step that offered no guarantees of long-term success.

At a morning news briefing, Coast Guard Adm. Thad Allen, commander of the national response to the disaster, said BP officials still had not closed the four vents of the containment cap, which would allow the well to begin pumping oil to the surface at far greater capacity.

In the meantime, thousands of gallons of oil are flowing into the sea as the massive slick hits shorelines and marshalnd in areas including Louisiana’s fishing towns and Florida’s white-sand beaches, where rust-colored globs are began washing ashore.

Allen said it was crucial to close the vents slowly to avoid putting too much pressure on the cap, which is being held in place with the help of a rubber gasket. “They’re easing the pressure up to the vessel … so they can maintain control of the oil,” said Allen.

As the vents are closed, officials must also ensure that water is not filtering in to mix with the oil and create hydrates, which led to the failure of an initial capping effort last month.

That requires the pumping downward of methanol, meaning officials must maintain a delicate balance at depths of 5,000 feet in conditions that could be disrupted in the event a major storm or hurricane forms. Hurricane season began Tuesday.
Allen said the full closure of the vents and the ramping up of oil production would depend on various conditions.

“They’re making sure they don’t increase the production rate until it is safe to do so,” said Allen. He also noted that the containment cap was only an interim, partial solution that was never guaranteed to fully plug the leak. A cap can only go so far – the only real solution is the completion of two relief wells currently being drilled. When they are finished, it will enable BP to plug the blown well and stop the spill, the worst in U.S. history.

One of the relief wells has been drilled to about 7,000 feet beneath the sea floor, less than half the distance it needs to go. The wells are not expected to be finished until early August.