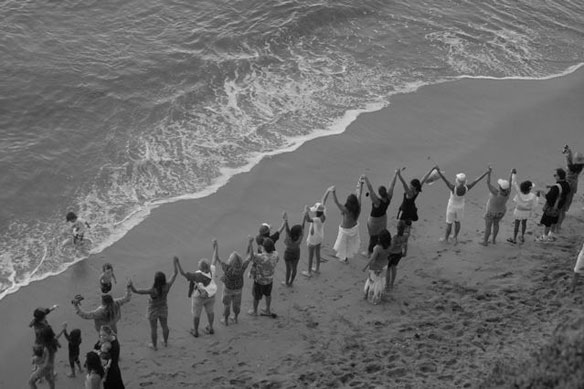 Photographer Lyndie Benson is a contemporary photographer specializing in Fine Art photojournalistic portraiture-Her subjects range from natives from the Bush in Africa to People and places in India and beyond with special artistic forays in between such as the Nudes On Boulders series, where Lyndie set loose nude models on 30ft boulders from the river Quai in Thailand. She has done campaigns, album covers, editorial and special charity projects such as The Best Buddies Campaign pairing intellectually disabled people with Celebrities of Iconic Stature as well as Save The Elephants. However Lyndie loves the freedom of Photojournalistic Portraiture where a single shot can express so much about the subject, be it a person, animal or beach. A series based on a decade of photographs from a community in Malibu called THE POINT has special significance and is seeped in culture and history. “On any given day you may walk down to the beach and see someone surfing with their dog” Something you don’t normally see in other communities for sure.

In this shot entitled PADDLEOUT from that series depicts a community coming together in the love and support of one of its fallen members. On THE POINT when someone passes away the whole community paddles out into the ocean and makes a giant circle of love-holding hands and they toss flowers or in some cases ashes into the beloved sea. It is such a special and emotionally supportive community that shares both the love of the community as well as the Ocean and the beach that they call home.

Lyndie BensonPhoto of the Month