E.P.A : It Was Wise to Use Oil Dispersant 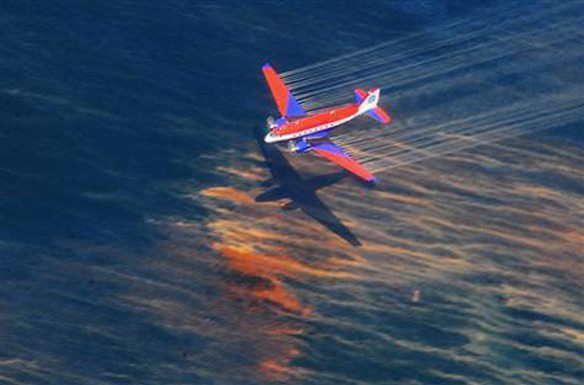 Spraying dispersants on oily water in the Gulf of Mexico doesn’t make the mixture any more toxic than the water was with Louisiana sweet crude alone, the Environmental Protection Agency said Monday.

Paul Anastas, the agency’s assistant administrator for research and development, said that the toxicity of the mix of oil and dispersant sprayed to combat the gulf oil spill was generally in the range of moderate, comparable to the effects of the oil.

So while the use of toxic chemicals in the gulf has always been recognized as a trade-off of risks, he said, the agency’s latest research shows that using dispersants to limit the effects of the BP spill was wise…

“The idea of fighting one toxic chemical, oil, with another, dispersant, does not sit well with all parties.” And Mr. Anastas said that further studies were needed. “The type of acute toxicity we’re discussing today is only one part of the hazard,’’ he said. Another is the health effects of the breakdown products of the dispersant, which the agency has yet to investigate…

Oil Spill Dispersants Shifting Ecosystem Impacts in Gulf, Scientists Warn, The New York Times
A seemingly feel-good story showed up this week on the nation’s front pages and newscasts: The oil that befouled the Gulf of Mexico for 86 days is vanishing from the surface, leaving workers with little to clean. But scientists warn the oil’s ecological impacts are shifting, not ebbing, thanks to massive volumes of dispersants that have kept the crude beneath the waves…

Louisiana blue crabs are tough, but oil spill and dispersant might be tougher

Scientists and Academics Call For Immediate Halt of Chemical Dispersants in Gulf, The Ocean Foundation
Over 100 scientists and academic institution, research laboratory, conservation organization leaders plus human rights defenders from as far away as Norway and Greece have issued, July 18th, a joint Scientists Consensus Statement on the Use of Chemical Dispersants in the Gulf of Mexico calling for the US Administration to immediately halt chemical aerial spraying in the Gulf region.
BP has used nearly two million gallons of Corexit chemical dispersants in the Gulf of Mexico as part of the cleanup effort with support from the U.S. Environmental Protection Agency (EPA). The massive volume of dispersants and the way they have been applied, both on the surface and one mile below the surface, is unprecedented. Once oil is dispersed in deep water, it cannot be recovered.
The rationale behind the use of the dispersant is to keep oil from the sensitive wetlands and coastlines. However, by dispersing the oil throughout the water column, this practice is making it impossible to recover the dispersed oil at the surface while plumes of the dispersed oil remain at depth, entering the food chain at many levels where it will bioaccumulate as it moves up the food chain.
Corexit is one of the most toxic dispersants and one of the least effective on Louisiana crude oil. However, it is the mixture of Corexit and oil that represents an even greater threat as the toxic effects are magnified. Corexit, designed to break down lipid layers, facilitates the movement of toxic materials across the membranes of wildlife and human beings. The dispersant-oil mixture is killing marine wildlife, including dolphins, whales and fish, while also causing a range of serious human health effects to those who have been exposed.
The scientists believe the worst impacts of the disaster are yet to come, and without deliberate, independent scientific tracking and assessment, they could remain hidden…