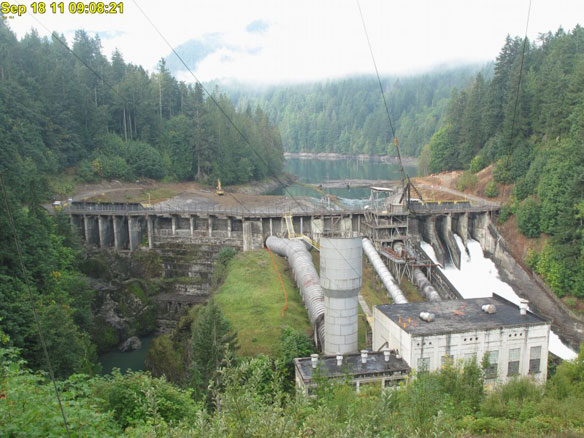 On The Elwha, A New Life When The Dam Breaks 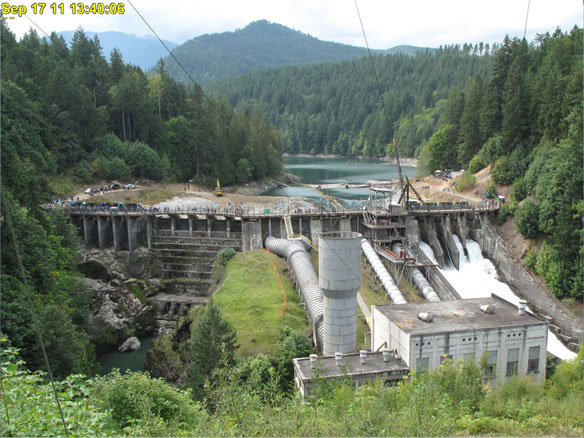 Excerpts; By The Smithsonian

The nation’s largest and most ambitious dam removal will begin this month, when workers start demolishing two antique dams on Washington state’s Elwha River. The Elwha has been cut off from its source in the Olympic Mountains for almost a century, and its once rich salmon runs have dwindled to practically nothing…

Biggest dam removal in U.S. history will look like this, Los Angeles Times
Nobody figured the largest dam removal project ever attempted in the U.S. was going to be easy — or fast. In fact, though the official demolition started Saturday, it will take two or so years to completely remove both dams on the Elwha River in Washington state, engineers say.

By Jonathan A. Warrick / USGS

The largest dam-removal project in U.S. history—the Elwha River Restoration Project—commenced during the second week of September 2011, when National Park Service contractors began to dismantle two dams on the Elwha River in Washington State. The 32-m-tall Elwha Dam and the 64-m-tall Glines Canyon Dam, completed in 1913 and 1927, respectively, have been blocking the natural supply of sediment to the lower river and coast and severely limiting salmon and steelhead spawning for nearly a century. In a ceremony celebrating the beginning of the Elwha River restoration, Secretary of the Interior Ken Salazar praised the project, saying, “America’s rivers are the lifeblood of America’s economy—from the water for farms that produce our food to the fish and wildlife that sustain our heritage.” He added that restoration will help support the culture of the Lower Elwha Klallam Tribe, who have lived along the river for centuries. 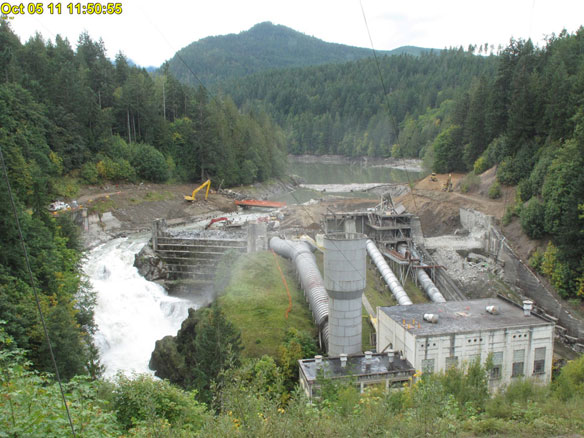 The Elwha River Ecosystem and Fisheries Restoration Act, passed by Congress in 1992, directed the Secretary of the Interior to study ways to fully restore the Elwha River ecosystem and native anadromous fisheries. (Anadromous fish, such as salmon and steelhead, spend most of their lives at sea but return to freshwater to breed.) In 2000, the federal government purchased the dams and related facilities, and on Saturday, September 17, 2011, removal of the dams began. News of this event appeared throughout the national media, including the New York Times, the Washington Post, National Public Radio, and the Associated Press.

To kick off the unprecedented restoration, the Olympic National Park and the Lower Elwha Klallam Tribe sponsored a week of festivities titled “Celebrate Elwha.” The U.S. Geological Survey (USGS), which has a long history of Elwha River research and monitoring (see related Sound Waves articles “Studying the Elwha River, Washington, in Preparation for Dam Removal” and “Dam Removal on the Elwha River in Washington—Nearshore Impacts of Released Sediment”), participated in numerous Celebrate Elwha events. Concurrently, several USGS research groups conducted their final “pre-removal” surveys of the conditions of the river, the reservoir sediment, the river-channel morphology, and the coastal setting at the river mouth. The multiagency activities of September 2011 helped to inform colleagues, managers, and the general public about the restoration of the Elwha River, as well as providing the final observations of the river in its dammed state.

Among the week’s activities was a 2½-day Elwha River Science Symposium, led by USGS scientist Jeff Duda of the USGS Western Fisheries Research Center (WFRC). The symposium was attended by more than 350 participants and included numerous scientific and multimedia presentations. Keynote speakers included experts in river and salmon restoration and people deeply knowledgeable about the Elwha: James Karr (Professor Emeritus in the University of Washington’s School of Aquatic and Fishery Sciences), Thomas Lovejoy (Professor of Environmental Science and Policy at George Mason University and founder of the Public Television series Nature), Yvon Chouinard (global conservationist and founder of the outdoor clothing and equipment company Patagonia), Martin Doyle (Professor of River Science and Policy at Duke University), Dick Goin (resident with 7 decades of experience observing the Elwha River and its salmon populations), Gordon Grant (Research Hydrologist at the U.S. Forest Service’s Pacific Northwest Research Station and Professor [Courtesy] in the Department of Geosciences at Oregon State University), David Montgomery (Professor in the Department of Earth and Space Sciences at the University of Washington), and Thomas Quinn (Professor in the School of Aquatic and Fishery Sciences at the University of Washington).

Perhaps the highlight of the week was the ceremony held on and adjacent to the Elwha Dam on September 17, 2011. Speakers at this event included Secretary of the Interior Ken Salazar, Washington Governor Chris Gregoire, Lower Elwha Klallam Tribal Chairwoman Frances Charles, U.S. Congressman Norm Dicks, U.S. Senators Patty Murray and Maria Cantwell, Assistant Secretary for Indian Affairs Larry Echo Hawk, Bureau of Reclamation Commissioner Michael Connor, and National Park Service Director Jon Jarvis. Music and dance were provided by several groups, including the Klallam Drum and Dance Group. Three USGS scientists—Jeff Duda, Pat Shafroth, and Jonathan Warrick—were among the half-dozen docents who welcomed attendees and provided interpretations for the day’s events. The ceremony ended with the removal of part of the Elwha Dam by an excavator with a gold-painted bucket. The excavator tore apart a section of the dam to the sounds of celebration drumming and singing by the Klallam Drum and Dance Group.

The commencement of dam removal begins a 2½-year process of taking down the Glines Canyon and Elwha Dams to help restore the once-vibrant salmon runs on the Elwha River. It also launches a new and important phase of scientific investigation, as researchers seek to describe and understand the changes that will occur to the ecosystems and natural resources of the Elwha River watershed and coast during and after dam removal. 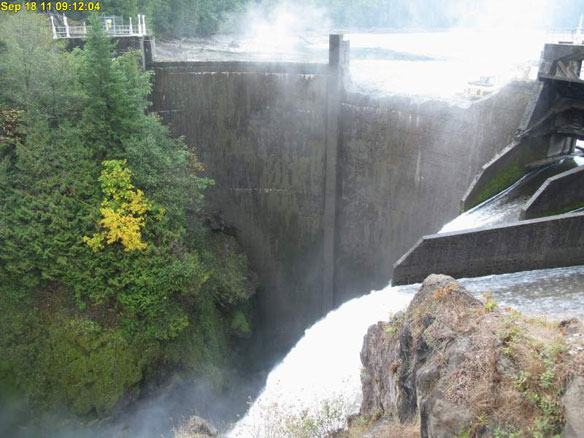