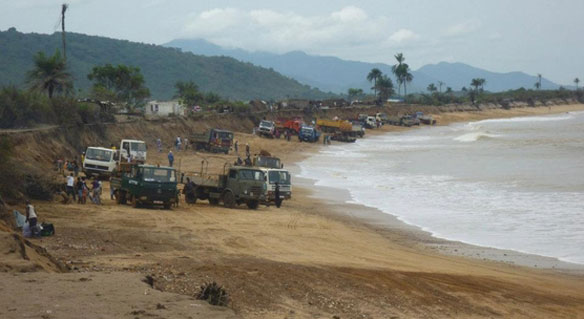 “It began slowly on the beaches closer to Freetown, Hamilton and Lakka. Chinese and Senegalese companies in need of sand to make asphalt to build roads, or quarries mixing it with cement for concrete-block buildings surrounded by barbed wire, the new image of “success” and “development” in Freetown, very similar to a prison to the untrained eye.”

Then suddenly, around February of 2012, the free-sand-for-all bonanza exploded. Without permits, hundreds of trucks attacked the beaches on a daily basis, hiring local boys as daily laborers to destroy their own communities. Hamilton beach and Lakka beach quickly disappeared.

The landscape changed. The trees collapsed. The mangroves are gone; there is nothing to protect the coast now from rainstorms and flooding. And so the trucks, always more numerous in numbers, moved west, and quickly arrived to John Obey beach. Some communities were forward-thinking enough to turn down promises of quick riches and temporarily employment to their residents, others unfortunately less so.

Everyone gets a piece of the pie, the local community is bribed to allow their beaches to be ransacked, the district councilman in nearby Waterloo fill their pockets, and the authorities in Freetown turn a blind eye. ..” Filippo Bozotti / Tribewanted

Read Full Article, And Learn More: Sierra Leone: Destroying Paradise To Make Concrete Blocks.
Sierra Leone has been my home away from home for the last two years. In 2010 we launched our ambitious second Tribewanted project there, on the pristine beaches of John Obey, in the Freetown Peninsula; a village of 500 souls, mainly fishermen and petty traders…

Sierra Leone:-Authorities Need To Take Firm Action To Protect Our Pristine Beaches, by Ishmael Kindama Dumbuya
First it was at the Lakka and Hamilton communities and beaches; now it is gaining momentum in all the beaches along the Western Area Peninsular Forest Reserve. Truck drivers are desperately moving from one beach to the other in search of sand for their daily sale to construction sites, and the Chinese and Senegalese construction companies are also moving to these pristine beaches for the white and shiny sand…

Need to protect our eco-tourism potentials, Sierra Express Media
Sierra Leone’s eco-water system is suffering a major degradation. Sand miners have evaded our country’s beaches exposing them to water sheds. Visiting Lakka, Borbo, and policing beaches around the peninsular areas, one can tell that sand lifting has disrobed the beauty of those once beautiful tourist destinations.