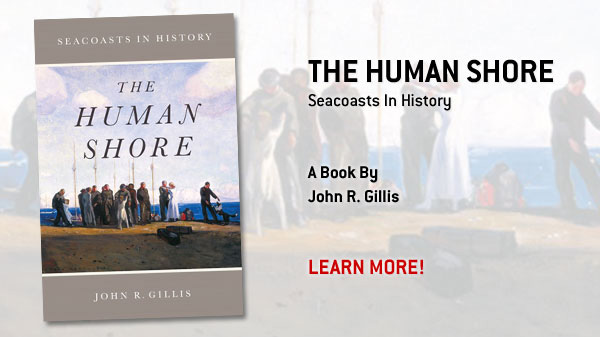 The Human Shore: Seacoasts In History

A book by John R. Gillis

Published by The University of Chicago Press

“It is a pleasure to see the culture and science of our shores dovetailed into a history of such authority and grace. This will be required reading.” —John Stilgoe, Harvard University

After a long period of moving inland, humans are now rushing back to coasts, with 54 per cent of all Americans now living within fifty miles of an ocean. Yet according to a new book, the latest generation of coastal dwellers are ill equipped to deal with coastal environments, for they are ignorant of the shore’s natural and human history. They live on the shore but do not know how to live with it. 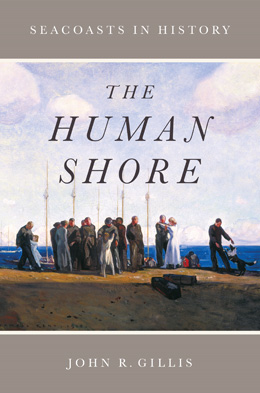 In his new book, The Human Shore: Seacoasts in History published by University of Chicago Press, November 2012, historian John R. Gillis explores the deep history of seacoasts, the original home of humankind.

Beginning with the moment that Africans came down to the shore, he follows the coastal migrations which ultimately populated the entire globe. Gillis shows how we have shaped coasts, and how they have shaped us.

“Coastlines are not found in nature,” he writes, “They are the product of human initiative, first imagined, then discovered, named, and, ultimately, surveyed and settled. As a historian, my task is to tell the story not of a physical object but of a cultural process, one by which our modern understanding of coasts came into being.”

The Human Shore: Seacoasts in History is the first comprehensive account of the rise of coastal civilizations on a global scale. It departs from conventional maritime history by focusing on the place where land and water meet.

Beginning with the first Homo sapiens that came down to the shore almost 164,000 years ago, it explores the misunderstood history of marine hunter- gatherers, showing how they laid the foundations for human progress. The story moves from the Mediterranean to the shores of Atlantic Europe, which launched the discovery of the seas and the coastal settlement of North America. Originally intent on exploiting the riches of the sea rather than land, Europeans lived lightly on the shores. For them, the coast was a frontier, facing both inland and seaward.

“Until the nineteenth century,” Gillis explains, “coasts were treated as a permeable, fluid boundary. Then, with the onset of industrialization and urbanization, attitudes toward shores changed. They became less a place of work than of leisure. The old coastal populations, who knew how to live in harmony with a fluid environment, were displaced by inlanders ignorant of this ancient way of life. Today, millennia of human experience is virtually forgotten.”

The Human Shore: Seacoasts in History explores the emergence of the modern coast from the
first seaside spas of the eighteenth century through the establishment of the beach holiday to contemporary surfing culture. It shows how waterfronts have changed as fishing and shipping have moved from old seaports to new locations. Gillis tracks the rise of the seascape as a unique element of modernity. He shows how central coasts have been to the identity of Europeans and Americans, even those who live far from the shore.

“Yet, even as we surge to the shore, lining it with summer and winter homes, we have become alienated from the sea,” says Gillis. “In the process, we have lost touch with its nature and our own human nature, as this was shaped over millennia of engagement with the precious place where land and water meet.”

Still, as it was from the first moment when Homo sapiens came down to the shore, coasts have remained a source of enormous cultural significance. As Rachel Carson predicted more than a half century ago, we are destined to return to the sea, not just physically but “mentally and imaginatively.” As a location for spiritual revelation, the importance of coasts remains undiminished, confirming Herman Melville’s observation that “meditation and water are wedded forever.”

Yet, this latest colonization of coasts from the interior has made them ever more vulnerable in this period of climate change. Many of the efforts to defend against sea rise, hurricanes, and tsunamis by hardening the shore have had the opposite effects. Gillis shows the folly of shoreline engineering and suggests that nature can protect itself if only we would allow wetlands and barrier islands to do their job.

“Every school child now knows that waters are rising, but few know anything about the multiple ways our species has coped, often successfully, with earlier episodes of inundation,” Gillis concludes. “We need to recover the wisdom of coastal peoples.”

The Human Shore: Seacoasts in History provides a needed corrective to coastal amnesia by providing multiple historical examples of the remarkable adaptability of our amphibious species.

About the author:
John R. Gillis is the author of Islands of the Mind, A World of their Own Making: Myth, Ritual, and the Quest for Family Values, and Commemorations. He is Professor History Emeritus at Rutgers University and now divides his time between two coasts: Northern California and Maine.