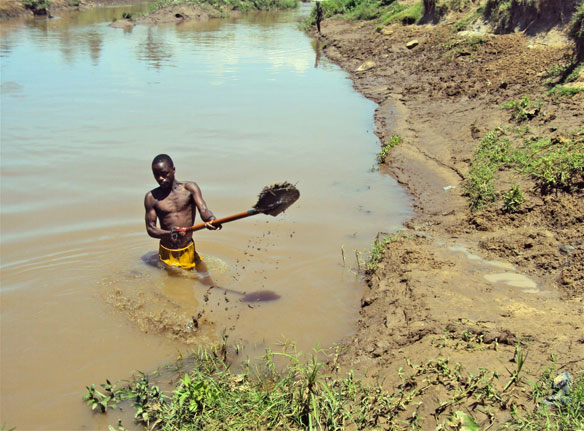 Every day, 180 trucks chug their way to the banks of a river near Lake Victoria and leave laden with sand. Their cargo fuels Kenya’s construction boom and the local labour market, but the extraction could spell disaster for the village of Nyadorera.

Government officials told IRIN that sand harvesting along the banks of River Nzoia, the biggest source of income for many of the area’s residents, risks displacing some 7,000 people.

“The village (along the bank) of the river is on the brink of collapse. The water has eaten most sections of the riverbanks, prompting its total collapse and thus threatening the lives of over 7,000 people,” Reuben Dienya, the regional water conservation officer with the Ministry of Water and Irrigation, told IRIN.

Residents say the harvesting has led to frequent flash flooding.

“We have witnessed a section of the village sinking due to landslides, and many of us have to vacate our homes when it rains,” James Otango, a resident, said.

The Kenyan government has already issued an alert over possible flash floods in various parts of the country.

Sand harvesting is common in Kenya’s arid and semi-arid areas, but left uncontrolled it depletes water catchment areas, and experts say there is need to promote sustainability by striking a balance between it and environmental conservation.

“Sand harvesting employs thousands of people, and with a booming construction industry now, it won’t end any soon. But there should be regulations like limiting the distance it should be from people’s homes, [and] planting trees along the rivers where it is done so that it doesn’t create disasters,” Daniel Mwamo, an environmental specialist at Maseno University, said.

Some of the most notable environmental effects of sand harvesting include the drying of aquifers, riverbank and riverbed erosion, water and air pollution, and the loss of valuable trees and animal species.

Many people along River Nzoia have had their crops swept away by flood waters, raising fears of food insecurity.

“My crops had started to do well, but the river flooded my farm and swept it away. Now I have nobody to complain to, and I don’t know what to do with my farm,” Lydia Otieno told IRIN.

Under the Environment Management and Coordination Act, sand harvesting can only happen after a proper environmental impact assessment has been carried out and with the approval of technical sand harvesting committees.

Officials, however, told IRIN that a lack of resources and interference from political leaders had hampered the enforcement of these regulations.

“We can’t carry out surveillance because we are thin on staff and so enforcing regulations is not easy. But, again, when you stop these activities, politicians will always influence [the process, ensuring] that they continue because of support [it wins them] during elections,” Dienya said.

School attendance is also often affected, as many children join the sand harvesting business to earn a living for themselves and their families.

“Our family had no food, sometimes I went to school on an empty stomach, and that affected my performance. Being an orphan, nobody seems to bother about my welfare. This forced me to look for alternative source of livelihood, and [sand harvesting] was available,” Lucas Onyango, 12, told IRIN.

The Women Sand Thieves, A Thalassa Documentary
450 km off the west coast of Africa, close to Mauritania and Senegal, with rocky mountains, lush valleys and sandy beaches, Cap Verde 10-islands archipelago appears as a small corner of paradise lost in the middle of the Atlantic Ocean. Yet, on the beaches, they are thieves, almost exclusively women, who collect sand, to be sold to the slow yet ever expanding construction industry. young girls are pulled away from school, as early as 12 years old (as depicted in the above documentary) and brought to the island shores, most of them crying at first, then docile, ultimately resigned to a strenuous and unsustainable life of sand stealing…