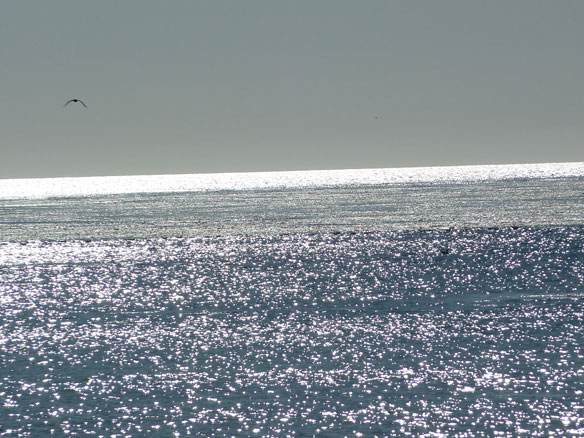 The (Less Than) Eternal Sea

“To call the ocean sublime we must regard it as poets do, merely by what strikes the eye; if it is at rest, as a clear mirror of water only bounded by the heaven; if it is restless, as an abyss threatening to overwhelm everything.” —Philosopher Immanuel Kant.

“…We needn’t call upon an angry god to make the sea an object of no small terror. Every year we withdraw from it 160 million tons of fish, deposit in it 7 million tons of garbage. Poisonous chemicals in the Gulf of Mexico have formed a pool of dead water equivalent in size to the state of New Jersey; among the several hundred dead zones elsewhere in the world, one encircles the Chinese coastline.

If the sea levels continue to rise at their current rate, the day is not far off when Miami and Atlantic City become beds for oysters. The fishing in the sea that was once near the surface now is done by trawls the length of locomotives dropped to the depth of a mile and dragged across the bottom, reducing many thousands of square miles of the ocean floor to barren deserts no longer giving birth to the tiny organisms from which emerge the great chains of being that sustain the life of the planet.

Nothing in the sea lives by itself, nothing either on the earth or in the air or in the minds of men. To know the sea is mortal is to know that we are not apart from it. Man is nature creatively refashioning itself. The abyss is human, not divine, a work in progress, whether made with a poet’s metaphor or with a vast prodigious bulk of Styrofoam.” —Lewis Lapham

The Mortal Sea: Fishing the Atlantic in the Age of Sail
“To the by-now-familiar story of the various depletions of species over the last 500 years (the haddock by 1930, the cod by 1992), Bolster, a professor of history at the University of New Hampshire, adds the dimension of events taking place on land, political and economic, cultural and demographic. Drawing together in the same net the two sets of datapoints (from the human maritime community and the marine-biological community), Bolster shows the ocean to be subject not only to the changes occurring over the course of evolutionary and geological time, but also, and ever more rapidly, to those imposed on it by the hand and mind of man.”—Lewis Lapham.