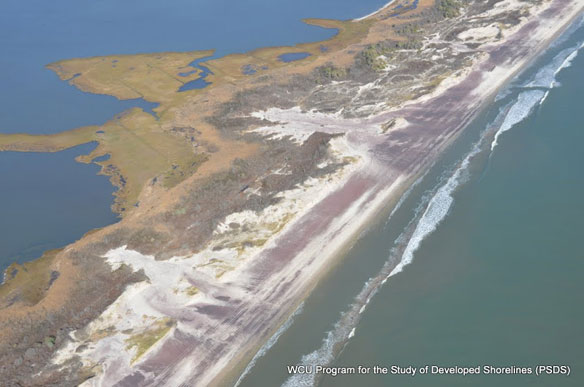 A new resource about Fire Island, N.Y. is now at the fingertips of coastal managers, planners and the public that will be useful for understanding and predicting future change on the island.

The United States Geological Survey created the public website that details a decade’s worth of research that focuses on changes to the beaches and dunes of the barrier island and understanding what affects their change.

Fire Island was severely impacted by Hurricane Sandy in October 2012. More than a year later, the USGS continues to study the changes left behind in its devastating path and generating critical information to aid the recovery process and help communities become more resilient against future storms.

“The website is intended to provide our federal, state and local partners and stakeholders with an access point to the large body of science we have produced, including the findings of the research that has been conducted at Fire Island,” said Cheryl Hapke, a USGS research geologist who is a principal investigator of the Fire Island Research.

In addition to understanding the impacts of the storm, USGS scientists are integrating analyses of short- and long-term coastal change to better understand what factors affect coastal shorelines and how geologic controls, sea-level rise and human activities contribute to their vulnerability. Results of the research at Fire Island are applicable to other barrier systems.

“Barrier islands are dynamic systems that also provide protection from future storms to the built environment,” Hapke said. “A thorough understanding of the long-term and short-term evolution of barrier islands can lead to models that better predict future changes to the coastal system at Fire Island.”

Fire Island is the longest of the barrier islands that lie along the south shore of Long Island, N.Y. The majority of the island is part of Fire Island National Seashore and is a unique and important recreational and ecosystem resource.

As a result of Hurricane Sandy, beaches and dunes on Fire Island lost more than half of their pre-storm volume. Field surveys conducted immediately after Sandy documented low, flat beaches and extensive dune erosion. Assessment of over wash deposits, the material that was carried to the interior of the island, indicates that most of the sand lost from the beaches and dunes during Hurricane Sandy was moved offshore or down the coast.