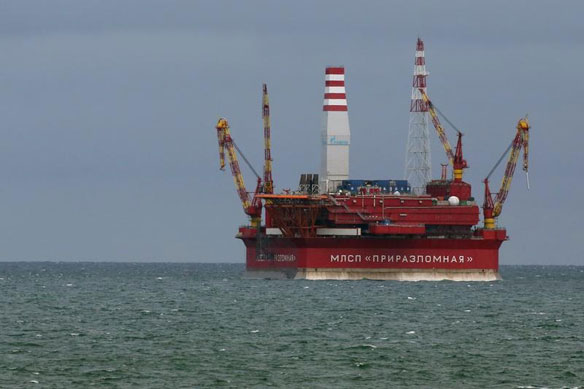 Arctic Oil: It Is Madness to Celebrate a New Source of Fossil Fuels

Gazprom oil drilling platfrom Prirazlomnaya, the site of a Greenpeace protest in September 2013, that resulted in the incarceration of 30 activists. Captions and Photo source: © Greenpeace

After months of delays, Russian state-owned oil and gas company Gazprom has announced that the first ever shipment of oil from offshore Arctic waters has begun the journey to Europe…

Gazprom Drilling for Arctic Oil With Second-Hand Rig, The Moscow Times (10-23-2013)
Gazprom’s Prirazlomnaya platform, the advance guard of the coming expansion of Russia’s state energy corporations into the Arctic, is a cobbled together bric-a-brac of second-hand parts, some of which date to 1984, environmentalists said…