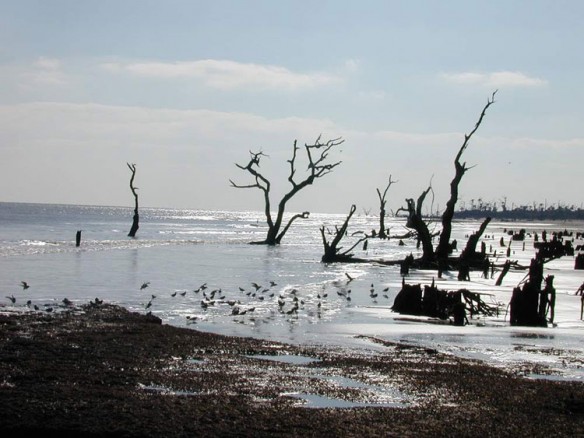 “The Us Congress will hold a hearing tomorrow on 9 separate bills that would remove properties and lands from the Coastal Barrier Resources System. CBRA was established to prevent federal funds from flowing into vulnerable barrier islands that were undeveloped in 1982. Several bills before committee would remove areas of North Carolina, South Carolina, and Florida from the system allowing them to access federal flood insurance, beach nourishment funding, etc. Following are the hearing notice and my testimony which I will present before Congress tomorrow.”

Before the House Committee on Natural Resources Subcommittee on Fisheries, Wildlife, Oceans and Insular Affairs;

(b) The Congress declares that it is the purpose of this chapter to minimize the loss of human life, wasteful expenditure of Federal revenues, and the damage to fish, wildlife, and other natural resources associated with the coastal barriers along the Atlantic and Gulf coasts and along the shore areas of the Great Lakes by restricting future Federal expenditures and financial assistance which have the effect of encouraging development of coastal barriers, by establishing the John H. Chafee Coastal Barrier Resources System, and by considering the means and measures by which the long-term conservation of these fish, wildlife, and other natural resources may be achieved.—Coastal Barrier Resources Act, 1982

The 1982 Coastal Barrier Resources Act included a solid combination of science- based policy making with a conservative, free-market approach to risk reduction and environmental conservation. The science is clear. Barrier islands are predictably hazardous locations on which to develop, invest, or maintain infrastructure. They are subject to long-term shoreline erosion, significant and devastating storm impacts, and rapid changes along inlet–adjacent shorelines. Many of this nation’s barrier islands have been completely inundated by storm waters multiple times over the last three decades.

“ We simply cannot afford to continue to hold hundreds of miles of shorelines in place with federal dollars… ”
— Robert S. Young

In addition, these hazards will only increase over the coming years as shoreline erosion continues. Coastal hazards on these low-lying, sandy shorelines are different than other hazards like tornadoes or wildfires in that they have a significantly higher recurrence interval and we can, from a scientific perspective, precisely identify the areas that will experience repeat impacts.

Dauphin Island, Alabama, for example, has suffered significant storm impacts 11 times since 1979 receiving 7 Presidential disaster declarations. Tornadoes do not destroy the same community multiple times in a period of 10 to 20 years, but coastal storms do, and barrier island communities bear the brunt of these storms. I can tell you with near certainty that we will be rebuilding the west end of Dauphin Island again at some point in the next ten years, probably sooner, rather than later. As a scientist, and hazards specialist, I cannot possibly pinpoint, with the same level of certainty, that any particular locality will experience tornado impact during this same timeframe.

The federal government invests millions to billions (depending on the year) of dollars annually in storm protection projects, erosion mitigation projects, and storm damage recovery projects to support the economies and property values on these barrier island communities. Federal and state taxpayers subsidize this investment with a dizzying array of mechanisms.

The Federal Flood Insurance Program, administered by the Federal Emergency Management Agency (FEMA), provides vulnerable properties access to flood insurance that would not be available in private markets. Many states have government-managed “wind pools” to keep the rates for non-flood property insurance artificially low. The largest insurer of coastal property in Florida is the State of Florida through its Citizen’s Property Insurance Corporation. Finally, private losses not covered by insurance are often written off at tax time, an indirect federal subsidy of risky development. Since 1988, residents of Dauphin Island have paid $9.3 million in flood insurance premiums to the federal government, but they have received $72.2 million in payouts for their damaged homes.

Community and state level funds for post-storm rebuilding come largely through the public assistance sections of the 1988 Stafford Act. This law created the federal system of emergency response that we are all so familiar with and works in tandem with congressional emergency appropriations bills to distribute aid to coastal communities following storms. The Stafford Act permits the rebuilding of the infrastructure that allows the investment property to exist: roads, utilities, even beaches and golf courses. Flood insurance may help put some homes back, but the Stafford Act permits the rebuilding of the infrastructure connected to those homes.
Finally, federal and state taxpayers have spent billions of dollars over the last four decades pumping up beaches in front of coastal properties (beach nourishment) and constructing coastal protection projects. Following Hurricane Sandy, the United States Army Corps of Engineers will be spending $4-5 billion building beaches, dunes, and storm protection primarily in New Jersey and New York. $700 million is being proposed for one nourishment project along Fire Island, which is made up almost entirely of parks. Even more mind-boggling is the fact that FEMA treats beach nourishment projects as infrastructure. If a storm washes away your beach, taxpayers will put it back. Make no mistake, these beach building projects are designed primarily to protect property, and where federal dollars are used, they are a federal subsidy to that coastal resort community.

“ The Coastal Barrier Resources Act was the ideal compromise. The Act did not ban the development of any coastal area. But, it did recognize the scientifically verifiable vulnerability of sandy, barrier island shorelines. ”
— Robert S. Young

Incredibly, some communities have even accessed federally backed loans to support beach nourishment projects through the United States Department of Agriculture’s loan program aimed at economic development in rural communities. In short, the federal government subsidizes the economy of, and investments in, coastal barrier island communities to a very large degree.
Please also keep in mind that the homes on most barrier island resort communities are largely investment properties, typically owned by LLCs, Trusts, or like entities. Our data show that along the oceanfront of North Carolina’s barrier islands, more than 90% of the properties are investment or rental properties.

It is frequently suggested that this enormous federal investment is justified because the “coastal economy” is so robust and powerful, generating significant jobs and local tax dollars, that we cannot possibly walk away. This is a very strange argument. If the coastal economy of barrier island resort communities is so powerful, it should be self-sustaining. It should not require massive federal investment, nor should it require manipulation of property insurance markets.

The Coastal Barrier Resources Act was the ideal compromise. The Act did not ban the development of any coastal area. But, it did recognize the scientifically verifiable vulnerability of sandy, barrier island shorelines. CBRA was a market- based experiment. If it makes economic sense to develop a particular area, then the development will move forward. But, those who stand to benefit from the development need to include the risk of that investment in their calculus. And, on low-lying, eroding, barrier islands, that risk is substantial, and growing.

I understand that Congress has a responsibility under the Act to consider errors made in creating the original maps designating CBRA properties. I will not comment on the legitimacy of any claims made in the bills before you today. However, I urge you to be judicious in the changes you agree to make. We should be reducing the exposure of federal taxpayers to the tremendous risks associated with coastal development, and allowing market forces to drive decision-making. Any substantial reduction in the size of the Coastal Barrier Resource System would be a costly mistake, and it would send a terrible message.

In fact, I urge you to consider a mechanism for expanding, rather than contracting CBRA. We simply cannot afford to continue to hold hundreds of miles of shorelines in place with federal dollars. And, we cannot continue to support multi- billion dollar emergency appropriations bills that routinely put oceanfront property back in place after a storm. I suggest that we expand the Coastal Barrier Resource System to include communities that receive multiple disaster declarations. Starting now, two or three more strikes, and you are out. Or, I should say, “in”. You are now in CBRA.

We can give these highly vulnerable communities plenty of warning, and a few chances, but ultimately they will need to account for the investment risk themselves. You can stay, but if you stay, you pay. Many people have heard the Dauphin Island story and exclaimed to me, “those people must be crazy to rebuild those homes over and over again.” In fact, they are not crazy. They are making a perfectly sensible economic decision based on the level of federal subsidy they receive for their investment. It is we who are crazy for assuming all the risk. The Coastal Barrier Resources Act was an effort to address that craziness. I urge you to maintain the integrity of the system and protect the spirit of the Act.”