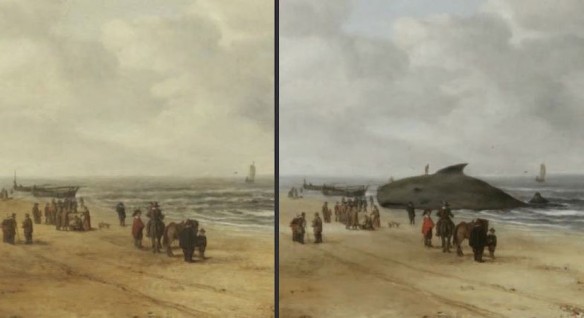 “View of Scheveningen Sands,” before and after conservators uncovered a beached whale in the painting. Photo source: Fitzwilliam Museum / LiveScience

When art conservators in the United Kingdom were cleaning a 17th-century Dutch seascape, they found a surprise: an image of a beached whale that had been hidden for at least 150 years.

Until recently, the painting — “View of Scheveningen Sands,” created by Hendrick van Anthonissen around 1641 — simply showed groups of people gathered on a beach in The Hague in the Netherlands…

WATCH: On Youtube: Whale tale: a Dutch seascape and its lost Leviathan-Fitzwilliam Museum
Earlier this year a conservator at the Hamilton Kerr Institute made a surprising discovery while working on a painting owned by the Fitzwilliam Museum. As Shan Kuang removed the old varnish from the surface, she revealed the whale that had been the intended focus of the scene…