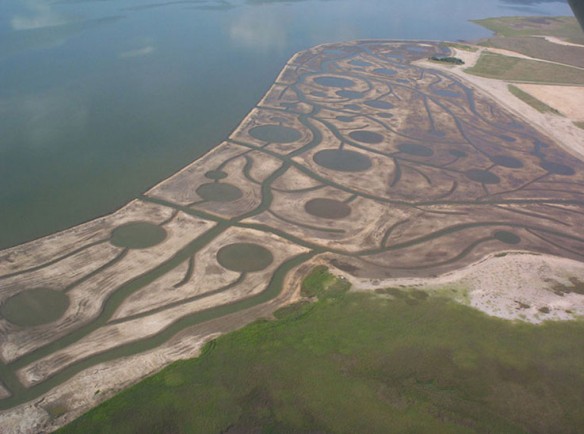 Restoration of Lavaca Bay, Texas. Seventy acres of salt marsh were created in Lavaca Bay, Texas, as a result of a cooperative natural resource damages settlement with NOAA. Captions and Photo source: NOAA

A new NOAA nationwide analysis shows that between 1996 and 2011, 64,975 square miles in coastal regions, an area larger than the state of Wisconsin, experienced changes in land cover, including a decline in wetlands and forest cover with development a major contributing factor.

Overall, 8.2 percent of the nation’s ocean and Great Lakes coastal regions experienced these changes. In analysis of the five year period between 2001-2006, coastal areas accounted for 43 percent of all land cover change in the continental U.S. This report identifies a wide variety of land cover changes that can intensify climate change risks, such as loss of coastal barriers to sea level rise and storm surge, and includes environmental data that can help coastal managers improve community resilience.

“Land cover maps document what’s happening on the ground. By showing how that land cover has changed over time, scientists can determine how these changes impact our plant’s environmental health,” said Nate Herold, a NOAA physical scientist who directs the mapping effort at NOAA’s Coastal Services Center in Charleston, South Carolina.

Among the significant changes were the loss of 1,536 square miles of wetlands, and a decline in total forest cover by 6.1 percent.

The findings mirror similar changes in coastal wetland land cover loss reported in the November 2013 report, Status and Trends of Wetlands in the Coastal Watersheds of the Conterminous United States 2004 to 2009, an interagency supported analysis published by the U.S. Fish and Wildlife Service and NOAA.

This new NOAA analysis adds to the 2013 report with more recent data and includes loss of forest cover in an overall larger land area survey. Both wetlands and forest cover are critical to the promotion and protection of coastal habitat for the nation’s multi-billion dollar commercial and recreational fishing industries.

These findings, and many others, are viewable via the Land Cover Atlas program from the NOAA’s Coastal Change Analysis Program (C-CAP). Standardized NOAA maps allow scientists to compare maps from different regions and maps from the same place but from different years, providing easily accessible data that are critically important to scientists, managers, and city planners as the U.S. population along the coastline continues to grow.