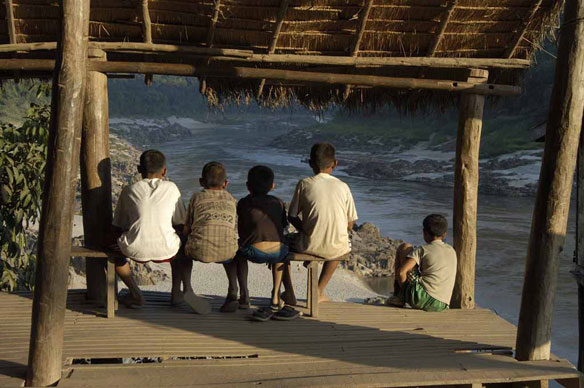 The Pak Beng dam, to be located north of Luang Prabang in northwestern Laos’ Oudomxay province. Pak Beng Dam, would create a stagnant reservoir, raise water levels behind the dam 40 feet, and back up the river near Huay Luk, forcing the resettlement of communities.
With a massive dam under construction in Laos and other dams on the way, the Mekong River is facing a wave of hydroelectric projects that could profoundly alter the river’s ecology and disrupt the food supplies of millions of people in Southeast Asia. Captions: Yale E 360. Photo source: International Rivers

Thayer Scudder, an emeritus anthropology professor at the California Institute of Technology and the world’s leading authority on the impact of dams on poor people, describes his disillusionment with dams…

What Is A Large Dam? Questions and Answers About Large Dams by International Rivers
A large dam is defined by the dam industry as one higher than 15 metres (taller than a four-story building). There are more than 40,000 large dams worldwide. There are more than 300 major dams – giants which meet one of a number of criteria on height (at least 150 metres), dam volume and reservoir volume…

Read Full Article: “World’s Largest Dam Removal Unleashes U.S. River After Century of Electric Production,” National Geographic
The blasts will destroy the last 30 feet of the 210-foot-high dam and will signal the culmination of the largest dam-removal project in the world.
In Asia, Africa, and South America, large hydroelectric dams are still being built, as they once were in the United States, to power economic development, with the added argument now that the electricity they provide is free of greenhouse gas emissions. But while the U.S. still benefits from the large dams it built in the 20th century, there’s a growing recognition that in some cases, at least, dambuilding went too far—and the Elwha River is a symbol of that…