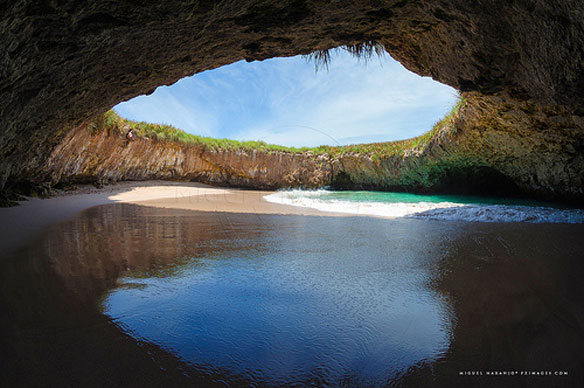 What Made Mexico’s Most Mysterious Beach?

The Marieta Islands, Isla Larga and Isla Redonda, are a small uninhabited islands a few miles off the North coast of the Banderas Bay, on the Pacific Coast of Mexico. Isla Redonda is famous for what is known as the “hidden beach” or “Playa de Amor…” Captions: ©© Puerto Vallarta. Photo source: Raintree Traveler

There’s an islet off the Pacific coast of Mexico with a pristine beach drilled into its central core like the hole of a donut. This hidden Eden continues to baffle geologists with its oculus of volcanic stone…

The Marieta Islands, Puerto Vallarta
The Marieta Islands are a small group of uninhabited islands a few miles off the North coast of the Banderas Bay, with two main volcanic islands dating from around 60,000 years ago, one called Isla Redonda (Round Island) and the other Isla Larga…These islands are a real natural treasure, at least what was left of them, as in the early 1900’s they were used as targets in military bombing exercises, something that would have continued, had it not been for the intervention, of, among others, Jacques-Yves Cousteau in the 1960’s. The islands are now relatively famous for what is known as the “hidden beach” or “Playa de Amor…