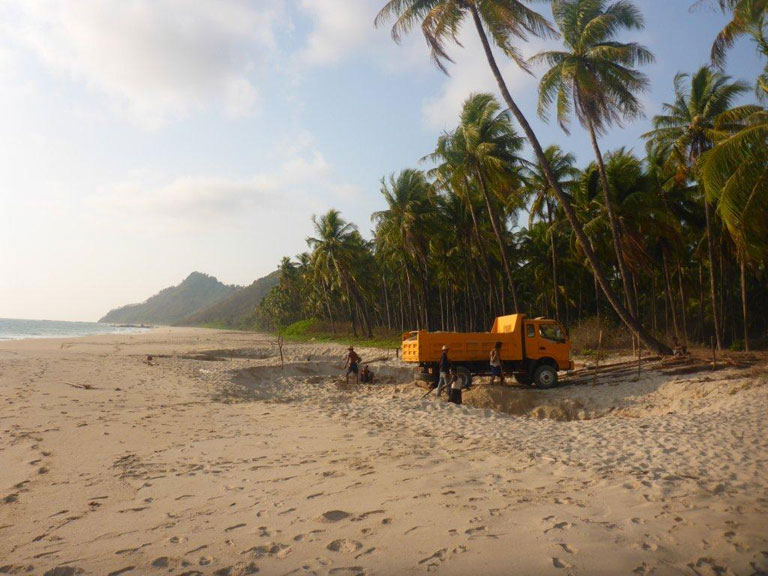 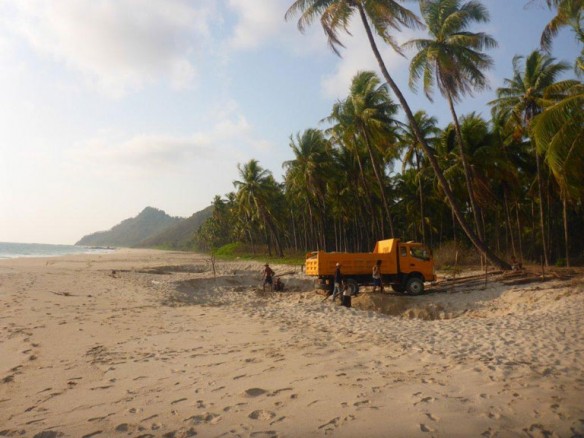 Ngapali Beach sand mining, Myanmar. Photo courtesy of: © Oliver E Soe Thet.
Ngapali Beach is a beach located 7 kilometres (4 mi) from the town of Thandwe (Sandoway), in Rakhine State, Myanmar. It is the most famous beach in Myanmar and is a popular tourist destination. Ngpali Beach is the most beautiful beach of Southeast Asia. The beach stretches for 3 km (2 mi) and overlooks the Indian Ocean. Captions: Wikipedia.

Hoteliers at Ngapali in southern Rakhine State have warned that beaches in the area could be irrevocably damaged unless the authorities stop allowing sand to be taken for construction projects.

Local authorities have formally allowed construction firms to take sand from three beaches in the area, in apparent violation of the Ministry of Hotels and Tourism’s Directives for Coastal Beach Areas.

Photos provided to The Myanmar Times in recent weeks, including on March 11, show privately owned trucks taking sand from several beaches at Ngapali. Hoteliers in the area said sand is being taken both day and night…

Sand Wars, An Investigation Documentary, By Denis Delestrac
Denis Delestrac latest feature documentary, “Sand Wars” is an epic eco-thriller that takes the audience around the globe to unveil a new gold rush and a disturbing fact: we are running out of sand!
“Sand is the second most consumed natural resource, after water. The construction-building industry is by far the largest consumer of this finite resource. The traditional building of one average-sized house requires 200 tons of sand; a hospital requires 3,000 tons of sand; each kilometer of highway built requires 30,000 tons of sand… A nuclear plant, a staggering 12 million tons of sand..