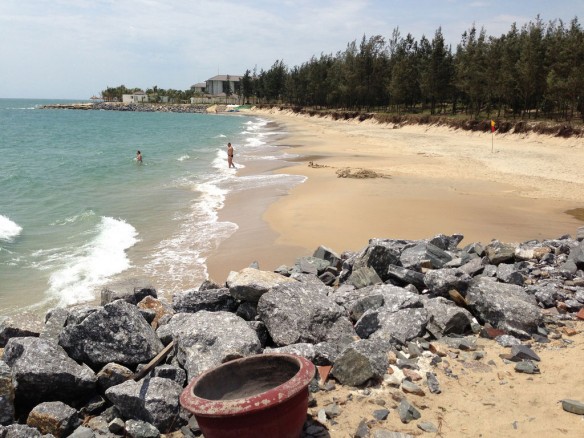 Hydropower dams on the Vu Gia – Thu Bon River system has hindered sedimentation downstream, causing severe erosion that could wipe out a popular beach in Hoi An town, experts warn.

“There has been a surge in dam building in the past three years, leading to a significant reduction in sediments being washed down to the estuary in the beach town of Hoi An,” Ca said…

Vietnam’s Hoi An faces imminent risk of losing beach to coastal erosion, Tuoitrenews
Cua Dai Beach, which is a gem of Hoi An City’s tourist industry and a major draw to international tourists, is being wiped out by sea waves at an alarming rate. Located in Quang Nam Province, Hoi An City includes the famous Hoi An Ancient Town that was declared a World Heritage Site by UNESCO in 1999.
The beach has seen relentless, devastating coastal erosion since October last year, with the damage spiraling out of control recently…

“The sad state of Vietnam’s beaches; due ignorance, environmental problems,” by The Beachfront Club