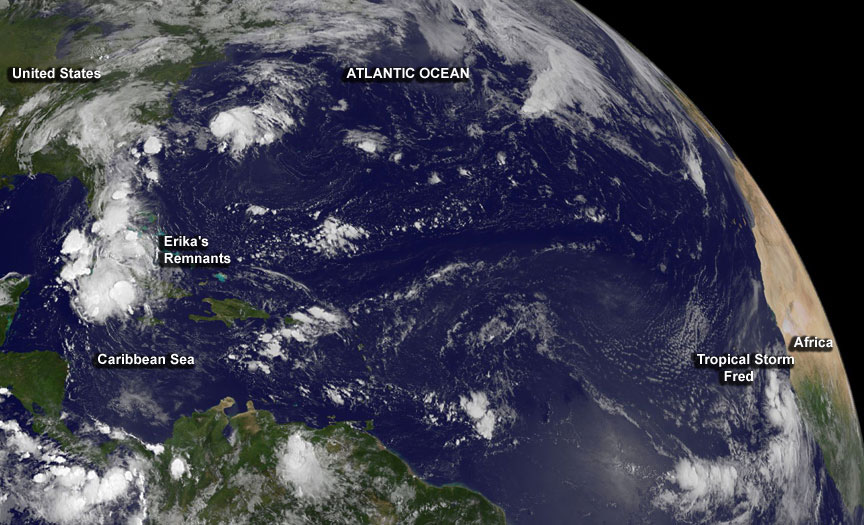 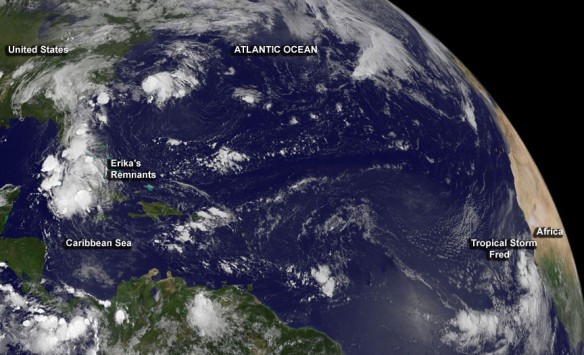 Tropical Storm Fred developed early on Sunday, August 30, 2015 from a tropical wave off the coast of Western Africa. NOAA’s GOES-East satellite captured a visible image of the new tropical storm.

A visible image from NOAA’s GOES-East satellite showed newborn Tropical Storm Fred was near the Cape Verde Islands in the Eastern Atlantic Ocean on August 30 at 7:45 a.m. EDT. The image was created by NASA/NOAA’s GOES Project at NASA’s Goddard Space Flight Center in Greenbelt, Maryland.

At 8 a.m. EDT (1200 UTC), the National Hurricane Center reported that the center of Tropical Storm Fred was located near latitude 12.9 North and longitude 19.3 West. That’s about 315 miles (505 km) east-southeast of Praia in the Cape Verde Islands. Maximum sustained winds are near 40 mph (65 kph) and NHC noted that steady strengthening is forecast during the next 48 hours, and Fred could be near hurricane strength when it moves through the Cape Verde Islands.

Fred was moving toward the northwest near 12 mph (19 kph) and that general motion is expected to continue through Tuesday. On the forecast track, the center of Tropical Storm Fred is expected to move through the Cape Verde Islands by late Monday, August 31 and into Tuesday, September 1.