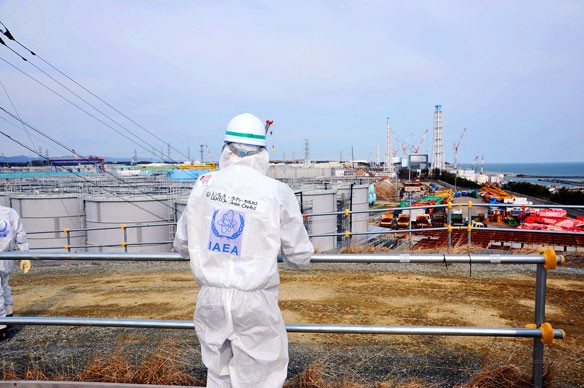 Scientists monitoring the spread of radiation in the ocean from the Fukushima nuclear accident report finding an increased number of sites off the US West Coast showing signs of contamination from Fukushima.

This includes the highest detected level to date from a sample collected about 1,600 miles west of San Francisco.

The level of radioactive cesium isotopes in the sample, 11 Becquerel’s per cubic meter of seawater (about 264 gallons), is 50 percent higher than other samples collected along the West Coast so far, but is still more than 500 times lower than US government safety limits for drinking water, and well below limits of concern for direct exposure while swimming, boating, or other recreational activities…

Fukushima Radioactivity Detected Off West Coast, WHOI (11-11-2014)
Monitoring efforts along the Pacific Coast of the U.S. and Canada have detected the presence of small amounts of radioactivity from the 2011 Fukushima Dai-ichi Nuclear Power Plant accident 100 miles (150 km) due west of Eureka, California…