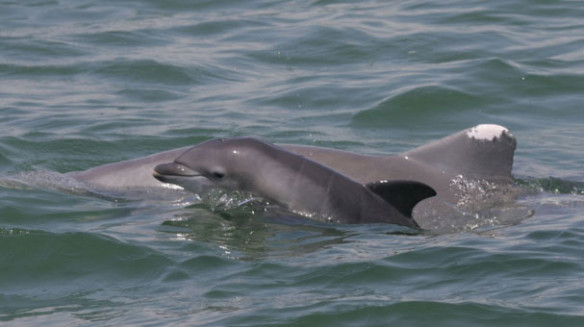 The paper, published in the journal Diseases of Aquatic Organisms, is part of an effort to explain the unusual mortality event in the Gulf involving bottlenose dolphins, between early 2010 and continuing into 2014. The investigations into both the fetal dolphin deaths, and the overall effects of the oil spill, are continuing. The long-term effects of the spill on dolphin reproduction are still unknown.

“Our new findings add to the mounting evidence from peer-reviewed studies that exposure to petroleum compounds following the Deepwater Horizon oil spill severely harmed the reproductive health of dolphins living in the oil spill footprint in the northern Gulf of Mexico,” said Dr. Teri Rowles, veterinarian, co-author on the study, and head of NOAA’s Marine Mammal Health and Stranding Response Program, which is charged with determining the causes of these events.

“In contrast to control populations, we found that Gulf of Mexico bottlenose dolphins were particularly susceptible to late term pregnancy failures, signs of fetal distress and development of in utero infections including brucellosis,” said Dr. Kathleen Colegrove, Ph.D., the study’s lead author and veterinary pathology professor at the University of Illinois Chicago-based Zoological Pathology Programoffsite link. 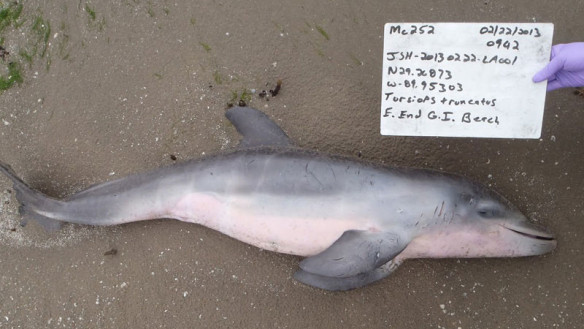 A stranded dolphin in March 2013. Young bottlenose dolphins have been dying in areas affected by the 2010 Deepwater Horizon oil spill. (Louisiana Department of Wildlife and Fisheries)

Scientists saw higher numbers of stranded stillborn and juvenile dolphins in the spill zone in 2011 than in other years, particularly in Mississippi and Alabama. “The young dolphins, which died in the womb or shortly after birth, were significantly smaller than those that stranded during previous years and in other geographic locations,” said Dr. Stephanie Venn-Watson, study co-author and veterinary epidemiologist from the National Marine Mammal Foundationoffsite link.

Bottlenose dolphins are pregnant for about 380 days, so stillborn and juvenile dolphins found in the early months of 2011 could have been exposed in the womb to petroleum products released the previous year. “Pregnant dolphins losing fetuses in 2011 would have been in the earlier stages of pregnancy in 2010 during the oil spill,” said Colegrove.

The researchers report that 88 percent of the stillborn and juvenile dolphins found in the spill zone had abnormal lungs, including partially or completely collapsed lungs. That and their small size suggest that they died in the womb or very soon after birth – before their lungs had a chance to fully inflate. Only 15 percent of stillborn and juvenile dolphins found in areas unaffected by the spill had this lung abnormality, the researchers said.

A previous study from lead authors Venn-Watson and Colegrove revealed that non-perinatal bottlenose dolphins that stranded in the spill zone after the spill were much more likely than other stranded dolphins to have severe lung and adrenal gland damage “consistent with petroleum product exposure.”

This study was conducted in conjunction with the Natural Resource Damage Assessment for the Deepwater Horizon oil spill, as well as the investigation into the northern Gulf of Mexico unusual mortality event. These results are included in the injury assessment documented in the Programmatic Damage Assessment and Restoration Plan. The marine mammal findings are found between pages 4-584 and 4-647. The restoration types laid out in the plan will address injuries to dolphins due to the oil spill.