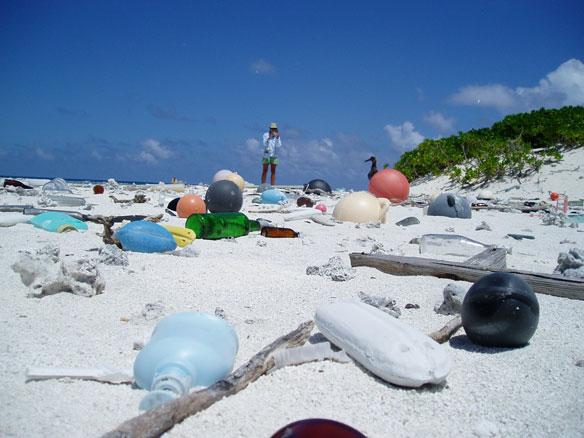 The Hawaiian archipelago is in trash trouble. Vast amounts of trash have been washing ashore on the state’s once-pristine beaches…

NOAA Removed 57 Tons of Marine Debris from Northwestern Hawaiian Islands; NOAA (11-12-2014)
A team of 17 NOAA divers sailing aboard NOAA Ship Oscar Elton Sette has returned from a 33-day mission to remove marine debris from Papahānaumokuākea Marine National Monument in Hawaii, a World Heritage Site and one of the largest marine conservation areas in the world…

A Real Monster: Marine Debris, NOAA
Each year, more than 50 tons (about the weight of a dozen elephants) of marine debris washes up on the shores within Papahānaumokuākea Marine National Monument. Since this protected area is very remote (more than a thousand miles from any major city) and mostly uninhabited by humans, all of this garbage is coming from somewhere else!

Tracking The Sources And Sinks of Local Marine Debris In Hawaii; (02-05-2013)
Plastic pollution has biological, chemical, and physical effects on marine environments and economic effects on coastal communities. These effects are acute on southeastern Hawai’i Island, where volunteers remove 16 metric tons of debris annually from a 15 km coastline…

“Midway.” A Love Story for our Time from the Heart of the Pacific”—By Chris Jordan, Midway Film; (04-01-2015)
A shocking film from Midway Island in the North Pacific Ocean, by Midway Film.

“© Midway: Message from the Gyre (2009),” from the Midway Series. Photograph courtesy of © Chris Jordan for Coastal Care’s Photo Of The Month, August 2010.
“When plastic ingestion occurs, it blocks the digestive tract, gets lodged in animals windpipes cutting airflow causing suffocation, or fills the stomach, resulting in malnutrition, starvation and potentially death. Indeed, it is found that debris often accumulates in the animals’ gut and give a false sense of fullness, causing the animal to stop eating and slowly starve to death.” —Captions: © SAF — Coastal Care