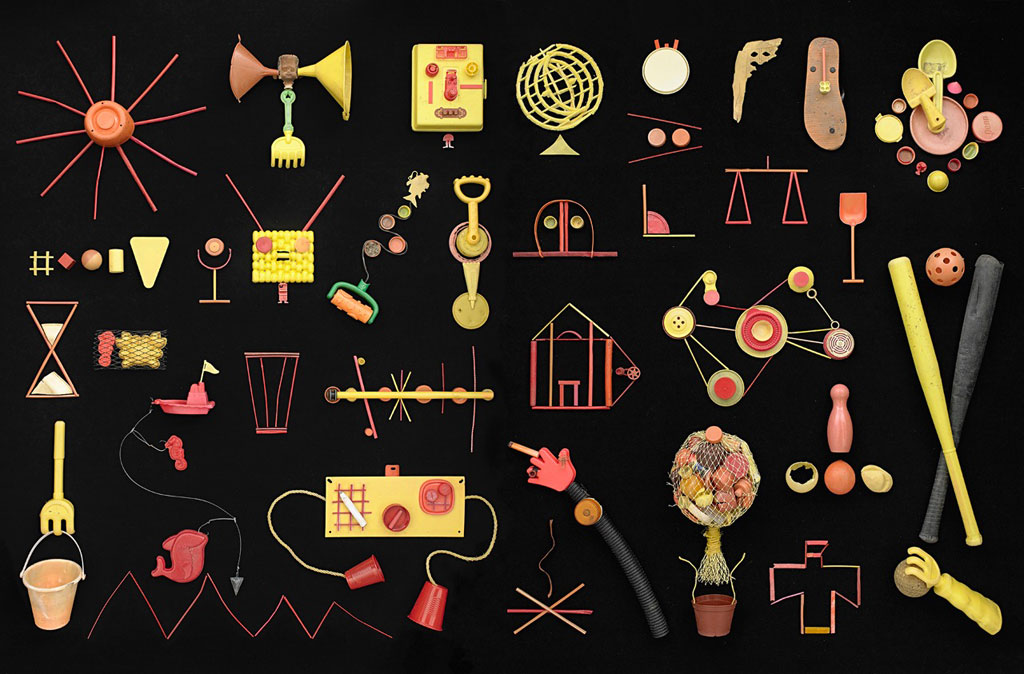 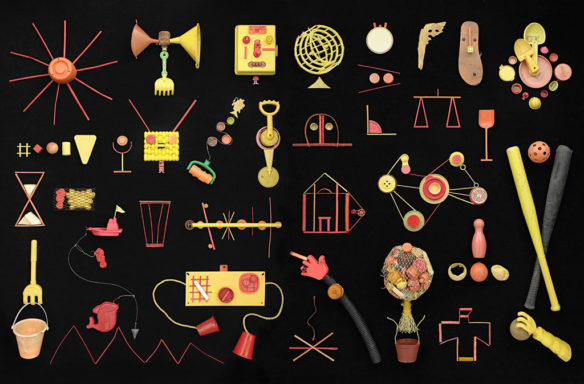 “We live in a time where consumer goods are increasingly growing in volume while at the same time their useful lives are shorter and shorter. Consuming without a thought of what is left behind is what we are taught. “Found in Nature” spotlights the remnants of consumer goods in the context of ocean borne pollution. The viewer confronts collections of found objects pulled from the shore of New York Harbor and sees the way humanity is managing its relationship with nature and the oceans in particular.”

Rosenthal explores one of the paradoxes of modern life. Can we live together in world crowded out by our own consumerism? Will the oceans survive our assault on them? Can the ocean food sources be reliable in the future? How long do we allow the destruction to continue before we crash the the system?

“Found in Nature” is a series of beautiful compositions that tell compelling stories about beach-trash. Barry collects previously discarded junk along the coastal areas of New York Harbor then curates and orders the objects by color, type and/or theme.

Barry Rosenthal is a photographer, an urban archeologist, a sculptor and collector. He studied photography at the Dayton Art Institute in Dayton, Ohio and at the Apeiron Workshops in Millerton, New York with notable photographers Emmet Gowin and George Tice. Barry‘s fine art images can be found in the permanent collection of the Museum of Modern Art in New York City and the Springfield Museum of Fine Art, Springfield, Massachusetts. Barry is a resident of Lower Manhattan, along with his wife and daughter.

“Found in Nature”, started in 2007 as an offshoot of his botanical work, has evolved from miniature collections of found objects into large-scale images that represent ocean borne trash. By using a combination of sculpture and photography and breaking down the found object trash into themes of type, color or whimsy, Rosenthal is able to bring awareness to the global issue of ocean pollution.

His project “Found in Nature” has a worldwide following and has created opportunities for Barry to talk about his work to a larger audience. His photographs have been published in arts and culture magazines as well as general interest news publications around the world. In the fall of 2010, Rosenthal became a resident artist at chashama in the Brooklyn Army Terminal in Brooklyn, New York. It was then that he was able to refine his vision of his project to where it became socially and environmentally conscious.

Barry Rosenthal has been selected to participate in “Earth SOS” Flomenhaft Gallery, a group show focusing on climate change and environmental decay.

“Our planet is in trouble. The goal of the exhibit is to portray art that awakens the public, with artists who are passionate about the issues facing planet Earth today. Together we will combine our efforts as we work to save us all from an ecological apocalypse.”

Rosenthal is a New York-based photographer, urban archeologist, and sculptor and collector. “Found in Nature”, started in 2007, has evolved from miniature collections of found objects into large-scale images that represent ocean borne trash. By using a combination of sculpture and photography and breaking down the found object trash into themes of color, whimsy and form, Rosenthal is able to bring awareness to the global issue of plastic pollution.

Barry Rosenthal has been selected to participate in The World Stage, sponsored by Next City for Habitat III, the UN’s major global summit focusing on sustainable urbanization.

Rosenthal’s project “Found in Nature”, along with the work of artists from seven other cities around the world, will be featured for this momentous event.

On Oct. 17-20, 2016, the world’s leading urban thinkers, advocates and policymakers will be converging in Quito, Ecuador, for the United Nations Conference on Housing and Sustainable Urban Development (Habitat III).

This event will bring together world leaders from government, academia and the private sector to reinvigorate a global commitment to sustainable urbanization and to work towards the implementation of the New Urban Agenda, a 20-year roadmap for ending poverty, mitigating climate change and improving living conditions for the 4 billion people living in the world’s cities. Not since 1996 has the international community come together with the explicit goal of determining a global strategy for sustainable urbanization.

The World Stage by Next City will be the premier hub for conversation about the future of cities during Habitat III. A publicly accessible exhibition space and gallery, the World Stage is where international experts and urban leaders will gather to engage in dialogue about the UN’s New Urban Agenda and learn about the strides toward increased resilience and equality being made in cities around the world.