Hazardous levels of domoic acid, a natural toxin that accumulates in shellfish, have been linked to warmer ocean conditions in waters off Oregon and Washington for the first time by a NOAA-supported research team, led by Oregon State University scientists.

Domoic acid, produced by certain types of marine algae, can accumulate in shellfish, fish and other marine animals. Consuming enough of the toxin can be harmful or even fatal. Public health agencies and seafood managers closely monitor toxin levels and impose harvest closures where necessary to ensure that seafood remains safe to eat. NOAA is supporting research and new tools to help seafood industry managers stay ahead of harmful algae events that are increasing in frequency, intensity and scope. 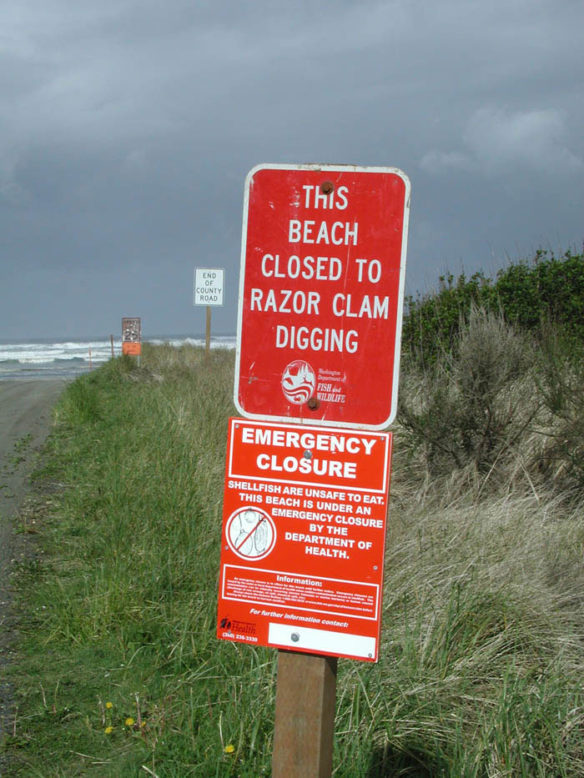 Using extensive time series of biological, chemical, and physical data, this study also created a climate-based risk analysis model which predicts where and when domoic acid in shellfish will likely exceed regulatory thresholds. The researchers will make this model freely available to support fisheries management decisions in Oregon, Washington and California.

In 2015, domoic acid-related closures led to a decline in value of nearly $100 million for the West Coast Dungeness crab fishery according to the Fisheries of the U.S. Report 2015.

“This study will help us determine if the increased climate-ocean variability we expect will lead to more widespread outbreaks like the West Coast-wide domoic acid event of 2015-16,” said co-author Bill Peterson, NOAA Fisheries. “If so, we’ll likely see increased domoic acid effects throughout the ocean food web.” For example, domoic acid events have been linked to mass deaths of marine mammals, like sea lions, sea otters, dolphins and whales.

“Advance warning of when domoic acid levels are likely to exceed our public health thresholds in shellfish is extremely helpful,” said Matt Hunter co-author of the paper with the Oregon Department of Fish and Wildlife. “Agencies like mine can use this model to anticipate domoic acid risks and prepare for periods of more intensive monitoring and testing, helping to better inform our decisions and ensure the safety of harvested crab and shellfish.”

Findings reported by McKibben and her co-authors resulted from their involvement in the NOAA-funded Monitoring Oregon Coastal Harmful Algae project (2007-2012). This research was conducted by scientists with NOAA, the University of Oregon, Oregon State University, and the Oregon Department of Fish and Wildlife, with funding from NOAA’s National Centers for Coastal Ocean Science Monitoring and Event Response for Harmful Algal Blooms (MERHAB) Research Program.

Spread of algal toxin through marine food web broke records in 2015, Science Daily (01-10-2016)
Researchers monitoring the unprecedented bloom of toxic algae along the west coast of North America in 2015 found record levels of the algal toxin domoic acid in samples from a wide range of marine organisms. The toxin was also detected for the first time in the muscle tissue or filet of several commercial fish species…