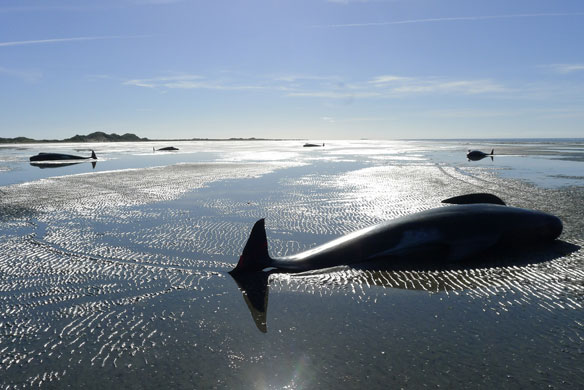 More than 400 whales beach themselves in New Zealand

New Zealand volunteers formed a human chain in the water at a remote beach on Friday as they raced to save dozens of whales after more than 400 of the creatures beached themselves in one of the worst whale strandings in the nation’s history.

400 pilot whales stranded on New Zealand’s ‘whale trap’ beach; New Scientist (02-10-2017)
More than 400 pilot whales washed up on beaches at Farewell Spit on the South Island, a known black spot for whale standings. The reasons for beachings remain a mystery. Explanations range from marine noise pollution to suicides, and NASA is even investigating whether solar storms could mess with whales’ navigation. But geography could certainly be a factor, considering several known stranding blackspots share characteristics…