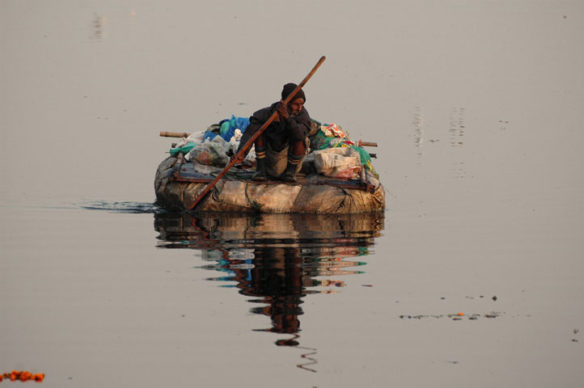 Floating rag picker, collecting discarded plastic bags from River Yamuna in Delhi, probably for selling for recycling. Unwittingly he is cleaning up the mess created by more educated and well off Delhiites. Captions and Photo source: ©© Koshy

The Ganges river, considered sacred by more than 1 billion Indians, has become the first non-human entity in India to be granted the same legal rights as people.

A court in the northern Indian state of Uttarakhand ordered on Monday that the Ganges and its main tributary, the Yamuna, be accorded the status of living human entities…

How to Steal a River, By Rollo Romig, The New York Time (03-01-2017)
To feed an enormous building boom, India’s relentless sand miners have devastated the waterways that make life there possible…

India’s Illegal Sand Mining Fuels Boom, Ravages Rivers; The Washington Post (05-22-2012)
The sand-mining frenzy, as it is happening right now in western India, illustrates one of the most important questions India faces in its march to become a 21st-century economic powerhouse: Can this nation of 1.2 billion people pursue economic growth without destroying its environment?

Princess Cruises Hit With Largest-Ever Criminal Penalty For ‘Deliberate Pollution’; NPR (12-01-2016)
The California-based cruise operator, Princess Cruise Lines, will pay a $40 million fine for “deliberate pollution of the seas and intentional acts to cover it up,” according to the Department of Justice, which calls it “the largest-ever criminal penalty involving deliberate vessel pollution.”…