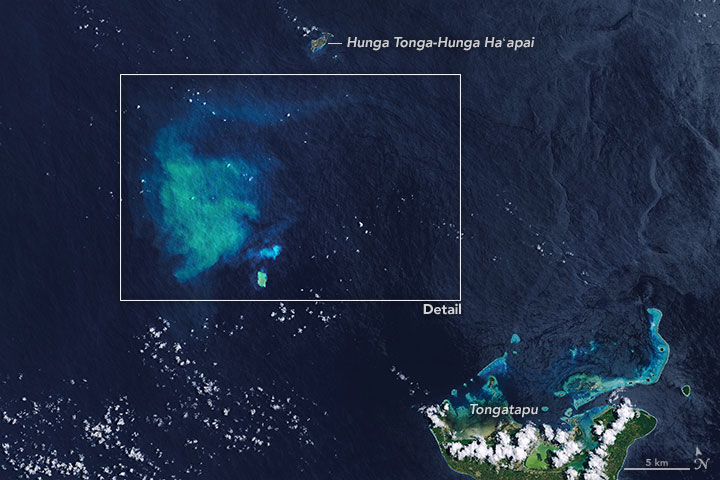 The Birth of a New Island; 2 videos by NASA Goddard Space Center 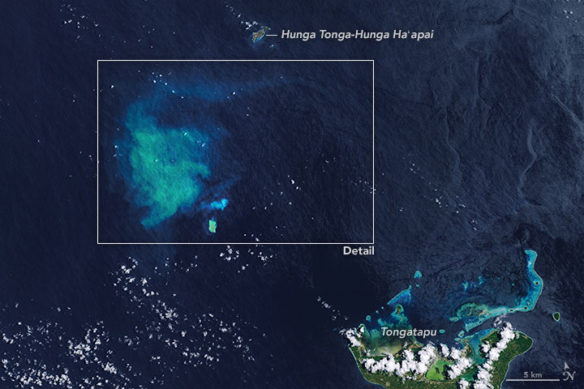 NASA Earth Observatory image by Joshua Stevens, captured on January 27, 2017, by the Operational Land Imager (OLI) on Landsat 8. The discolored water was likely caused by the underwater release of gases, rocks, and volcanic fluids.

In late December 2014 into early 2015, a submarine volcano in the South Pacific Kingdom of Tonga erupted, sending a violent stream of steam, ash and rock into the air. When the ash finally settled in January 2015, a newborn island with a 400-foot summit nestled between two older islands – visible to satellites in space.

The newly formed Tongan island, unofficially known as Hunga Tonga-Hunga Ha’apai after its neighbors, was initially projected to last a few months. Now it has a 6- to 30-year lease on life, according to a new NASA study.

WATCH VIDEO: The Birth of a New Island; By NASA Goddard Space Center Uploaded on Youtube, on 12-11-2017.

WATCH A SECOND VIDEO: A New Time-lapse of an Island Forming in Tonga; By NASA Goddard Space Center Uploaded on Youtube, on 12-11-2017.
Hunga Tonga-Hunga Ha’apai is the first island of this type to erupt and persist in the modern satellite era, it gives scientists an unprecedented view from space of its early life and evolution.
The new study offers insight into its longevity and the erosion that shapes new islands. Understanding these processes could also provide insights into similar features in other parts of the solar system, including Mars.