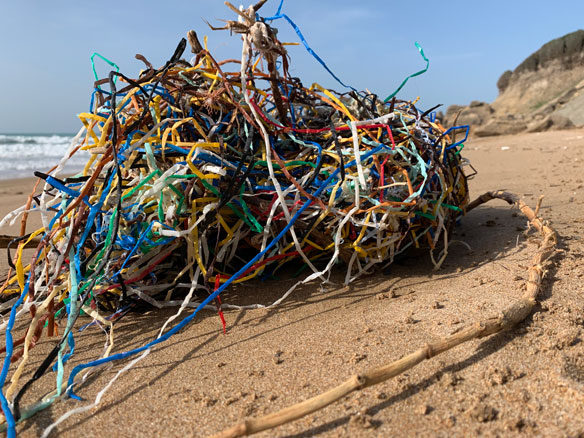 A floating device designed to catch plastic waste has been redeployed in a second attempt to clean up a huge island of garbage swirling in the Pacific Ocean between California and Hawaii.

Boyan Slat, creator of the Ocean Cleanup project, announced on Twitter that a 600 metre (2,000ft) long floating boom that broke apart late last year was sent back to the Great Pacific garbage patch this week after four months of repair…

Remember that kid who invented a way to clean up ocean plastic? He’s back, and it’s happening; MNN (09-04-2018)
Boyan Slat’s solar-powered booms will soon be in the Pacific Ocean…

Inventor tries to conquer the “Great Pacific Garbage Patch”; CBS News (09-07-2018)
A ship on Saturday will start towing a long device from Northern California more than 1,000 miles out to sea to begin scooping up a massive heap of trash that’s estimated to weigh 88,000 tons. It may look like a giant pipeline, but the 2,000-foot-long contraption will soon be cleaning up what’s known as the “Great Pacific Garbage Patch,” made up of an estimated 1.8 trillion pieces of floating plastic…

Boyan Slat’s Ocean Cleanup Project Launches Historic First Prototype at Sea, EcoWatch (06-23-2016)
Boyan Slat’s ambitious plan to rid the world’s oceans of plastic has taken another step towards reality with its first prototype to be tested at sea. The Ocean Cleanup Foundation, founded by the 21-year-old Slat, has deployed a 100-meter clean-up boom today in the North Sea in The Netherlands…

Plastic Pollution: “When The Mermaids Cry: The Great Plastic Tide,” Coastal Care
Plastic is versatile, lightweight, flexible, moisture resistant, strong, and relatively inexpensive. Those are the attractive qualities that lead us, around the world, to such a voracious appetite and over-consumption of plastic goods. However, durable and very slow to degrade, plastic materials that are used in the production of so many products all, ultimately, become waste with staying power. Our tremendous attraction to plastic, coupled with an undeniable behavioral propensity of increasingly over-consuming, discarding, littering and thus polluting, has become a combination of lethal nature…