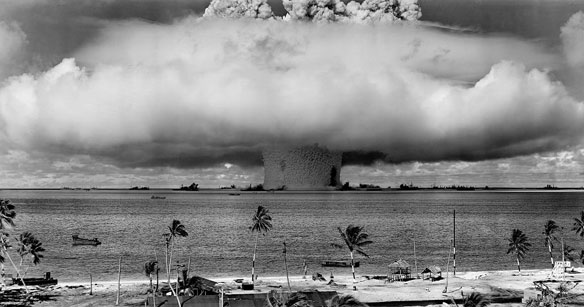 How the U.S. betrayed the Marshall Islands, kindling the next nuclear disaster 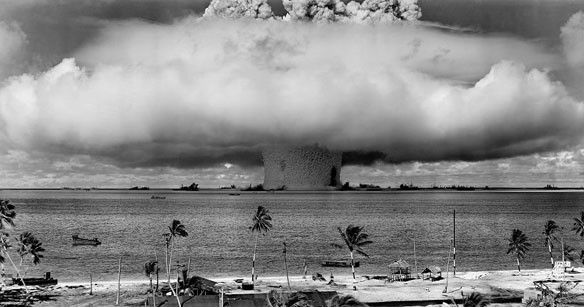 The “Baker” explosion, part of Operation Crossroads, a nuclear weapon test by the United States military at Bikini Atoll, Marshall Islands, Micronesia, on 25 July 1946.
There was no classic mushroom cloud rising to the stratosphere, but inside the condensation cloud the top of the water geyser formed a mushroom-like head called the cauliflower, which fell back into the lagoon. The water released by the explosion was highly radioactive and contaminated many of the ships that were set up near it. Some were otherwise undamaged and sent to Hunter’s Point in San Francisco, California, United States, for decontamination. Those which could not be decontaminated were sunk a number of miles off the coast of San Francisco. Captions and Photo source: US Army

In the Marshall Islands, Runit Dome holds more than 3.1 million cubic feet — or 35 Olympic-sized swimming pools — of U.S.-produced radioactive soil and debris, including lethal amounts of plutonium. Nowhere else has the United States saddled another country with so much of its nuclear waste, a product of its Cold War atomic testing program…

Revisiting Bikini Atoll, NASA (03-10-2014)
Sixty years ago, the United States detonated a thermonuclear bomb on Bikini Atoll in the Marshall Islands, that altered the landscape, hundreds of lives, and the trajectory of a nuclear arms race…