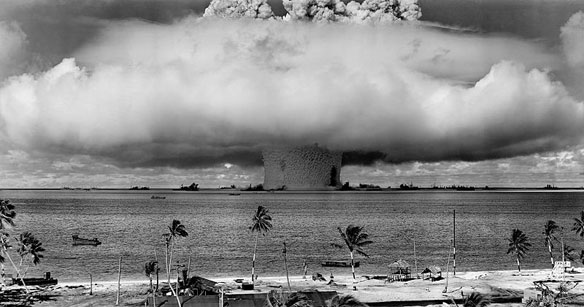 Sixty years ago, the United States detonated a hydrogen bomb that altered the landscape, hundreds of lives, and the trajectory of a nuclear arms race.

An explosion that was expected to produce 4 to 6 megatons of explosive force instead produced 15 megatons. The mushroom cloud of superheated air, water, and fallout reached 40 kilometers (130,000 feet) into the air—well into the stratosphere—and eventually spread to four continents. It was the largest above-ground test of a hydrogen bomb in U.S. history.

This image shows the Castle Bravo crater left behind by the explosion, which was 1,000 times more powerful than the atomic bomb dropped on Hiroshima in August 1945. The hole is 2 kilometers (1.2 miles) across and 80 meters (260 feet) deep.

The upper image shows the Castle Bravo crater left behind by the explosion, which was 1,000 times more powerful than the atomic bomb dropped on Hiroshima in August 1945. The hole is 2 kilometers (1.2 miles) across and 80 meters (260 feet) deep.

The second image (below) shows the reef system that forms the foundation of Bikini Atoll, a chain of 23 islets.

Twenty three nuclear bomb tests were conducted at Bikini between 1946 and 1958, with the March 1954 explosion being the largest. Nearly one thousand islanders were moved to other islands in the archipelago during the years of the tests. And while there have been several attempts to decontaminate the islets and to resettle people for several years in the 1970s, the islands are officially unihabited today. UNESCO has declared Bikini Atoll to be a World Heritage Site as a reminder of the Cold War and nuclear arms race. 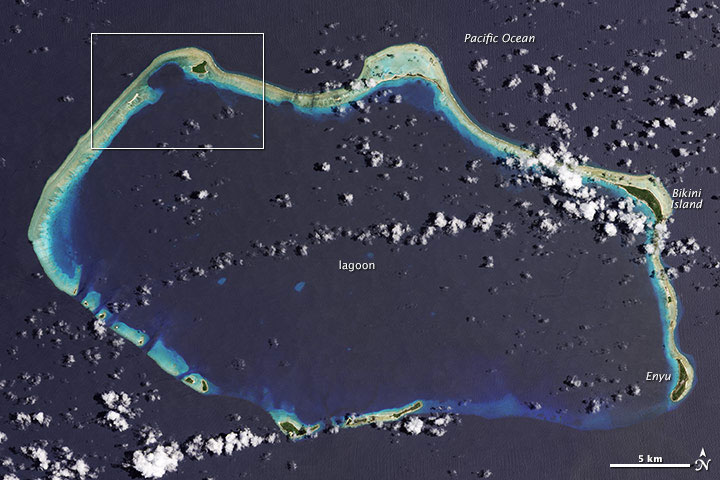 This image was captured by the Operational Land Imager on the Landsat 8 satellite on August 19, 2013.