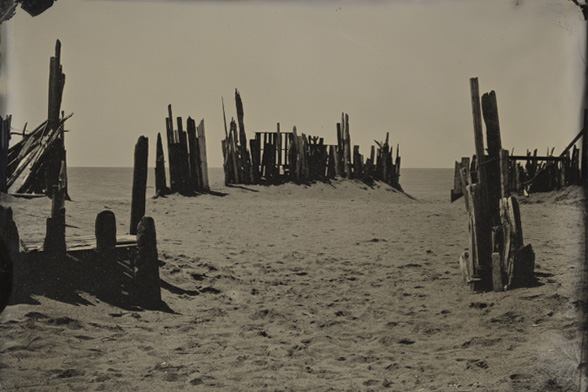 “I stumbled upon this while scouting in Staten Island. It was an interesting art-like structure with no apparent purpose, It reminded me of the remains of some former habitation, whether civilian or military—it’s unclear, but I believe it was designed to give that impression. I went back a couple of times and then suddenly, one day it was gone.”
—Joni Sternbach

My pictures over recent years engage traditions of landscape, seascape, and architectural photography. Working with a large-format camera and historic process (wet-plate collodion), I have concentrated on locations that are close to or directly on the water. At this juncture between land and sea, I explore subject matter in a constant state of transition.

For the last year I have been drawn to the people present at these locations, specifically the surfers in Montauk’s Ditch Plains, at the eastern end of Long Island. Their avocation is on the water; they are persistent elements in a shifting scene. We overlap on the periphery of two powerful elements; the land and the sea. The singular, primitive act of surfing on the water is eclipsed by the social and negotiated state of human interaction on the shore. The surfers act as a bridge between the sea as an unbridled force of nature and the shore line, a place of leisure and cultural phenomena.

Working with a “wet” instantaneous process that must be prepared and developed on location serves me well. It draws spectators as well as entices new subjects. Using collodion compels me to compose carefully before sensitizing the plate, yet its very nature is spontaneous and unknowable. The raw quality of the process suits the subject matter, and the distinctive appearance of the finished works echoes nineteenth-century traditions of anthropological photography.

Joni SternbachPhoto of the Month