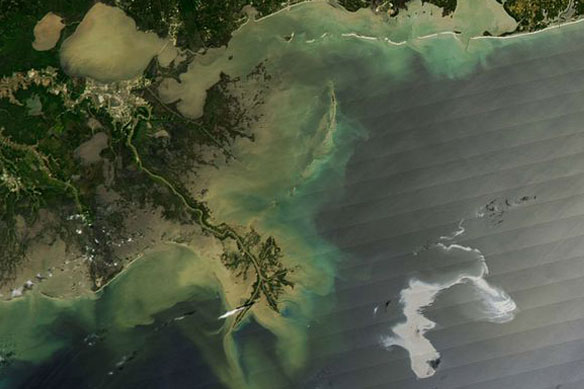 From The Times by Jacqui Goddard in the Gulf of Mexico, Tim Reid in Washington and Frank Pope, Oceans Correspondent

The massive oil spill pouring from a ruptured rig in the Gulf of Mexico has reached the coast of Louisiana, threatening an environmental catastrophe in the region.

The first fingers of oily sheen reached the mouth of the Mississippi River on Thursday evening local time, 24 hours ahead of previous estimates by the US Coast Guard

As the sun began to set over the fragile wetlands surrounding the Mississippi, the oil was slipping into the South Pass of the river and already lapping at the shoreline in long black lines.

Although US government agencies and BP set up 100,000 feet of booms to protect coastal areas from the slick, rough seas sent five foot waves of oily water over the top of the booms into the river.

The slick is on its way to becoming Americas’s worst environmental disaster in decades, endandering hundreds of species of fish, birds and other wildlife in one of the world’s richest marine environments.

Even before the spill neared the coast, wildlife experts said a toxic mix of chemicals was poisoning the waters of endangered marine life and fisheries, including one of only two breeding grounds world-wide for Atlantic bluefin tuna.

“It is of grave concern,” said David Kennedy of the National Oceanic and Atmospheric Administration. “I am frightened. This is a very, very big thing. And the efforts that are going to be required to do anything about it, especially if it continues on, are just mind-boggling.”

Fear turned to fury among local residents as BP, which has leased the Deepwater Horizon rig from owner and operator Transocean, stood accused of playing down the scale of disaster after as it emerged that five times more oil was surging into the Gulf from the seabed than had been calculated previously.

There is a growing sense among the fishermen and tourist guides dependent on the wetlands for their livelihood that the Government has once more failed them, just as it did in the wake of Hurricane Katrina.

President Obama was briefed on the disaster and ordered Janet Napolitano, the Homeland Security Secretary, and Ken Salazar, the Interior Secretary, down to the Gulf Coast today.

Mr Obama said: “While BP is ultimately responsible for funding the cost of response and clean-up operations, my administration will continue to use every single available resource at our disposal, including potentially the Department of Defence, to address the incident.”

The operation now involves 1,100 people and more than 70 vessels. Last night, the Governor of Louisiana declared a state of emergency.

Cade Thomas, a fishing guide in Venice, said he was terrified that his livelihood will be destroyed. He said he did not know whether to blame the Coast Guard, the federal government or BP.

“They lied to us. They came out and said it was leaking 1,000 barrels when I think they knew it was more. And they weren’t proactive,’ said Mr Thomas. “As soon as it blew up, they should have started wrapping it with booms.”

US experts are now fearful that it could take weeks, or even months, to shut off the ruptured pipe — yesterday a third leak was discovered — meaning that within two months the spill would surpass the 11 million gallons that leaked from the Exxon Valdez tanker in the notorious spillage off the Alaska coast in 1989, America’s previous worst oil disaster.

Louisiana Governor Bobby Jindal declared a state of emergency on Thursday so officials could begin preparing for the oil’s impact. He said at least 10 wildlife management areas and refuges in his state and neighboring Mississippi are in the oil plume’s path.

The 100-mile by 45-mile slick also threatens the Alabama coast.

It also emerged yesterday that the oil rig did not have a remote-controlled shut-off switch used in other oil-producing nations, such as Norway and Brazil, which could have closed down the well after the explosion.

The device, known as an acoustic switch, is not required under US law, but the lack of one added to questions about BP’s operation of the Deepwater Horizon. It exploded 50 miles off the Louisiana coast on April 20. The cause of the blast, which killed 11 of the 111 workers on board and set the rig ablaze before it eventually sank, has yet to be determined.

Mr Suttles said that Deepwater Horizon was equipped with other safety devices that should have prevented this type of spill, in which the oil is coming out of fractures on a severed pipe connected to the wellhead, 5,000ft below the surface.

Dozens of vessels were trying to contain the spill, using a variety of methods. Crews triggered a series of controlled fires to burn off the thickest parts of the slick, while booms, skimmers and chemical dispersants were trying to stop the rest from reaching shore. Heavy seas, forecast to last into next week, are hampering the operation.

BP was due to start drilling a new “relief” well that would allow them to stop the flow from the seabed, although officials said that it would take at least two months to complete.

A separate effort was also under way to try to place a dome on the ruptured wellhead but that, too, could take weeks.

More than 400 species are threatened by the oil, including wading birds and sea otters. The Gulf’s abundant oyster and shrimping grounds are also in danger of severe damage.

Marine and coastal life from the smallest plankton to the resident sperm whales will all be affected, experts say. Valuable fisheries for oyster and menhaden fish are at risk, as is the breeding of endangered turtles and bluefin tuna.

If the slick spreads, the rare manatees of the Florida panhandle could be under threat.

Much depends on where the slick ends up and the success of the efforts to contain it.

If it is taken by the Gulf’s defining current, which is known as the Loop, the oil may also reach the Florida Keys and endanger the region’s coral and resident marine populations.

The type of oil leaking from the sea floor is complicating matters. It is called sweet crude, which contains heavy compounds, known as asphaltenes, that do not burn easily or evaporate, even on the warm Louisiana coast.

With light crude, both burning and chemical dispersants work well, but neither tactic is very effective against sweet crude, raising fears that nothing can be done to stop the oil reaching shore.