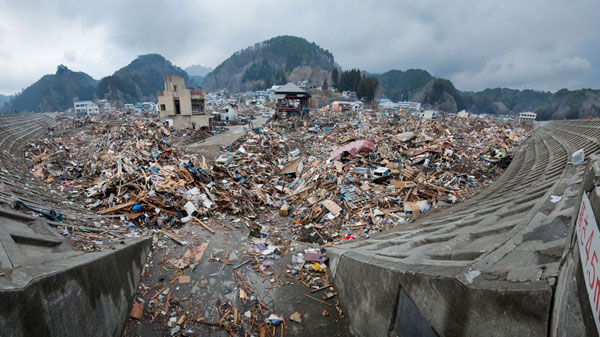 The Cherry Blossoms will Soon Be Blooming: Japan’s Recovery Efforts in the Wake of the 2011 Tsunami, by Mark Edward Harris

Japan was rocked by the strongest earthquake in its recorded history on the afternoon of March 11, 2011. Yet it was the ensuing tsunami that brought the most devastation.

For the introduction to my book, “The Way of the Japanese Bath,” which documented the country’s hot spring tradition, I wrote: “While all the primeval geological and geothermal rumblings under Japan have set off devastating volcanic eruptions, tsunamis, and earthquakes (ten percent of the world’s volcanic activity occurs in Japan), they have also provided the 127 million inhabitants of the island nation on the Ring of Fire with a very unique way of life.

” But it was not until the magnitude 9.0 Great East Japan Earthquake did the other half of the equation become devastatingly clear.”

With train and most bus service to Tohoku (the northern area of Japan’s main island of Honshu) stopped, I enlisted the support of my Tokyo-based colleague Yoshi Ohkuma to get into the coastal areas most affected by the tsunami.

We covered more than 1200 miles by car, driving from Tokyo through Fukushima to Sendai (where waves up to 23 feet engulfed the coastline and traveled at points five miles inland), then to Miyako, Taro, Jodogahama, Kamaishi, Kesennuma, Ofunato, Otsuchi (where half of the town’s 15,000 residents are either dead or missing), and Rikuzen Takada (documenting a recovery team using dogs). Driving from one coastal town to another, it became obvious that the difference between life and death was often a matter of a few feet. For the most, part those who did not get beyond the reach of the tsunami waves disappeared.

Driving from one coastal town to another, it became obvious that the difference between life and death was often a matter of a few feet. We encountered massive scenes of destruction, yet people determined to move forward with their lives and to help their fellow citizens do the same.
—Mark Edward Harris

We encountered massive scenes of destruction but also people determined to move forward with their lives and to help their fellow citizens do the same. Chie Tachibana, who we met in Arahama near Sendai, took us to a two-story kindergarten and community center that doubled as an evacuation center. The tsunami came in further than expected and for many of those on the first floor, the building became a tomb.

The people of the coastal towns are rebuilding their lives and their towns out of utter devastation with a quiet fortitude.

I am reminded of a photograph that the great LIFE magazine photographer Alfred Eisenstaedt took of a woman with her young son sitting on a pile of rubble in Hiroshima less than half a year after the first atomic bomb detonated over that city. Eisie was able to capture the quiet strength and fortitude of this woman. While the sailor kissing the nurse in Times Square is his most famous photograph, this incredible environmental portrait may be his strongest. W. Gene Smith’s photographic work in the coastal town of Minamata in the 1970s on the southern island of Kyushu portrayed the struggles of local people dealing with a man-made disaster caused by the poisoning of their water by a factory.

It remains to be seen how the nuclear disaster at Fukushima caused by the tsunami will affect present and future generations.

Gerd Ludwig’s and Paul Fusco’s photographic studies of Chernobyl and Ken Domon’s images of Hiroshima survivors show the horrors of radiation exposure. Yet, in the face of this, when I contacted my friends and colleagues in Japan to say that I wanted to come to the country to document post earthquake/tsunami Tohoku, without exception they mentioned that I would be there in time to witness the cherry blossoms make their annual south to north pilgrimage.

Perhaps there is something in the innate understanding of the cycles of nature that give the people of Japan the strength to dig themselves out of disasters of epic proportions with a quiet dignity.

When it comes to a psychological study, I don’t know if the camera can do what a pen can do so eloquently when put in the right hands. But in the situation, where strong visuals can convey the magnitude of a situation, the camera has no equal.

Fukushima: How the ocean became a dumping ground for radioactive waste