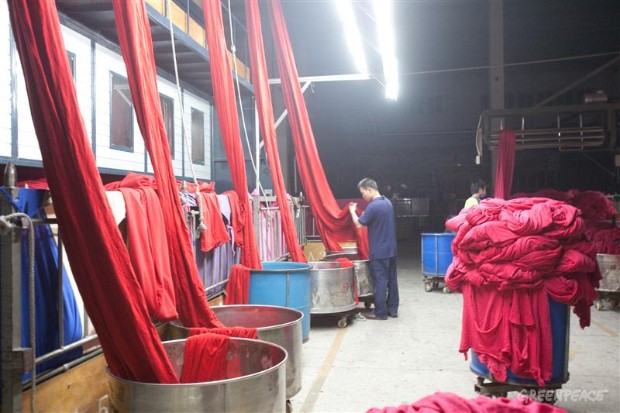 The chemicals, which break down to form nonylphenol, which has toxic, persistent and hormone-disrupting properties, were detected in clothes bought and manufactured in locations all over the world, demonstrating that the use and release of hazardous chemicals is a widespread and pervasive problem with serious, long-term and far-reaching consequences for people and wildlife.

“Our research shows that global clothing brands are responsible for the discharge of hazardous chemicals into waterways in China and across the world, as part of their manufacturing processes,” said Yifang Li, Toxic Water Campaigner at Greenpeace East Asia. “People have a right to know about the chemicals that are present in the very fabric of their clothing and the harmful effects these chemicals have when released into the environment.”

Launched August 23rd 2011, in Beijing and Manila, Greenpeace’s second “Dirty Laundry” report presents the results of analysis of clothing and fabric-based shoes sold internationally by major clothing brands. Of the 78 articles tested, 52 were found to contain nonylphenol ethoxylates, chemicals which breaks down into the hormone-disrupting nonylphenol. The findings provide a snapshot of the kind of toxic chemicals that are being released by the textile industry into waterways all over the world and are indicative of a much wider problem. To highlight this problem and the need for urgent solutions, activists in the Philippines today hung out t-shirt shaped banners exposing the 14 brands ‘Dirty Laundry’ over the Marikina River, challenging them to “Cut the chemicals and Detox our water “.

Released six weeks ago, the first Greenpeace Dirty “Laundry” report detailed the results of a year-long study linking many of the same clothing brands to suppliers in China who were found to be releasing a cocktail of chemicals into the Pearl and Yangtze River deltas.

Nike and Puma have publicly committed to the elimination of all discharges of hazardous chemicals from their supply chains and products.

“Now that Nike and Puma have committed to cleaning up their supply chains, and are using their power as brand owners to influence the environmental impacts of their production, Adidas and other leading clothing brands can no longer avoid the responsibility of ensuring that the environment, their customers and people across the world are no longer threatened by the release of hazardous chemicals”, said Li.

Greenpeace is an independent global campaigning organisation that acts to change attitudes and behaviour, to protect and conserve the environment and to promote peace. Greenpeace is campaigning to stop industrial pollution of our water with hazardous, persistent and hormone-disrupting chemicals by demanding that companies and governments take action to “Detox” our future.

1) Greenpeace International submitted 78 articles of clothing for analysis by a leading independent laboratory, which examined them for the presence of nonylphenol ethoxylates (NPEs), man-made chemicals often used as a surfactant in the textile industry. Where released untreated, NPEs break down in rivers to form the persistent, toxic and hormone disrupting nonylnhenol (NP). Even where wastewater containing NPEs is treated, this only speeds up the conversion into the toxic NP. More detailed information on these substances are available on page 12 of “Dirty Laundry II” report.

Dirty Laundry: Unravelling The Corporate Connections To Toxic Water Pollution In China
“Dirty Laundry”report, profiles the problem of toxic water pollution resulting from the release of hazardous chemicals by the textile industry in China.Greenpeace is calling on the brands and suppliers identified in this investigation to become champions for a toxic-free future, by eliminating all releases of hazardous chemicals from their supply chains and their products.

Dirty Laundry II: Unravelling The Toxic Trail From Pipes To Products
Research commissioned by Greenpeace International has revealed that clothing and certain fabric-based shoes sold internationally by major clothing brands are manufactured using nonylphenol ethoxylates (NPEs). Nonylphenol is a persistent chemical with hormone-disrupting properties that builds up in the food chain, and is hazardous even at very low levels.