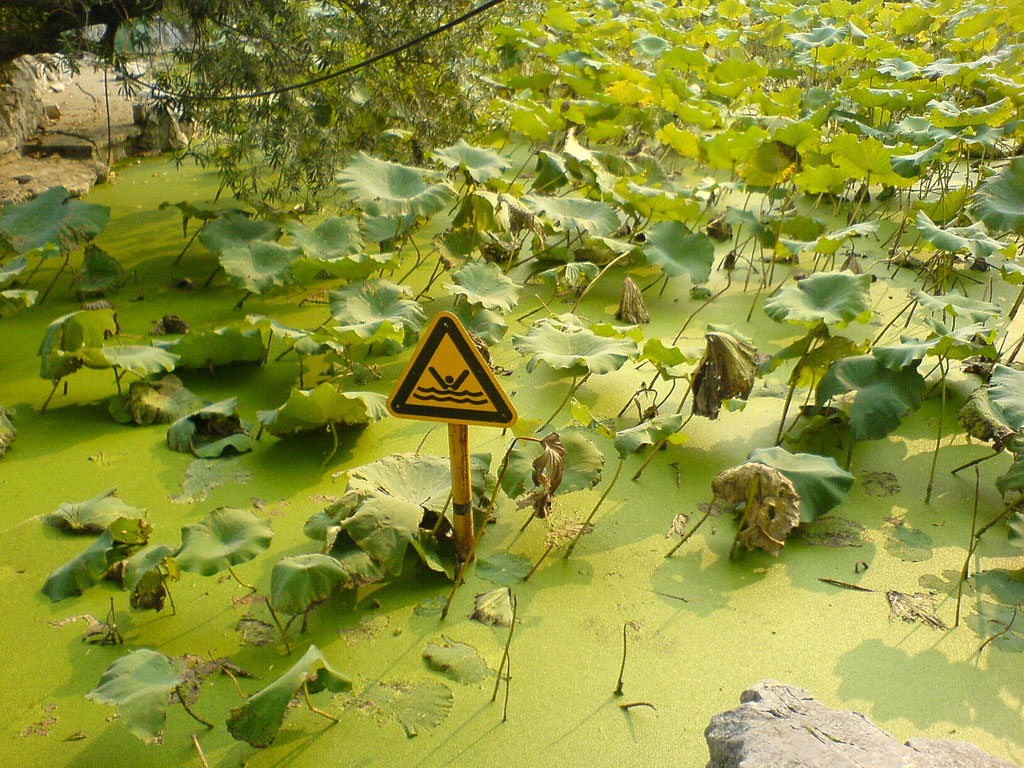 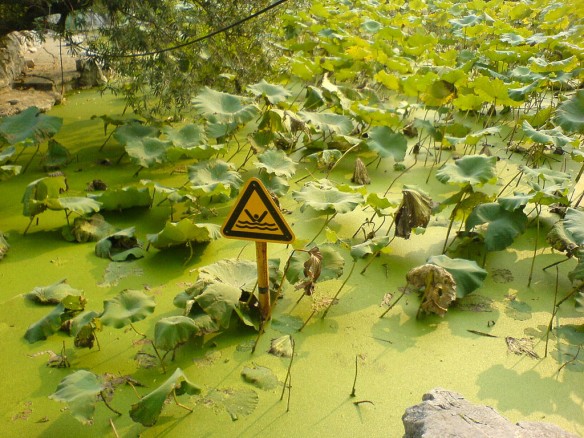 In Qingdoo, Shandong Province of China, the coastal waters are covered with algae called enteromorpha prolifera (ulva prolifera). Though the green algae is not poisonous per se, it can consume large amounts of oxygen that can threaten marine life.

The North China Sea Marine Forecasting Center of State Oceanic Administration cited a July 23 monitoring statistics as saying that about 19,050 square km of seawater in the Yellow Sea were found with algae, while some 500 square km were covered with the plant…

Acute toxicity of live and decomposing green alga Ulva ( Enteromorpha) prolifera to abalone Haliotis, Harvard / The Smithsonian/NASA data
From 2007 to 2009, large-scale blooms of green algae (the so-called “green tides”) occurred every summer in the Yellow Sea, China. In June 2008, huge amounts of floating green algae accumulated along the coast of Qingdao and led to mass mortality of cultured abalone and sea cucumber. This study examined the toxic effects of Ulva (Enteromorpha) prolifera, the causative species of green tides in the Yellow Sea. The acute toxicity of decomposing algal effluent could be attributed to the ammonia and sulfide presented in the effluent, as well as the hypoxia caused by the decomposition process.

500 square kilometers of the Yellow Sea off China covered by a massive bloom of green algae, CNN News

Are Blue-Green Algae Toxic? EPA
Species of blue-green algae can include both toxin-producing (Harmfull Algae Bloom, HAB) and non-toxin-producing strains. Little is known about the environmental conditions that trigger toxin production, and there is no way to tell just by looking at a bloom whether or not it will produce toxins.

On the recurrent Ulva prolifera blooms in the Yellow Sea and East China Sea, A Scholar Study, 2010, University Of South Florida

The Second Life Of Green Algae