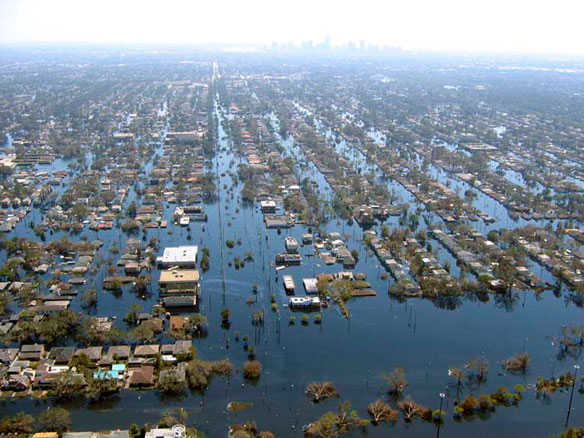 In the busy and under-staffed offices of New Orleans’ flood-control leaders, there’s an uneasy feeling about what lies ahead.

By the time the next hurricane season starts in June of 2013, the city will take control of much of a revamped protection system of gates, walls and armored levees that the Army Corps of Engineers has spent about $12 billion building. The corps has about $1 billion worth of work left.

Engineers consider it a Rolls Royce of flood protection — comparable to systems in seaside European cities such as St. Petersburg, Venice, Rotterdam and Amsterdam…

The Army Corps estimates it will take $38 million a year to pay for upkeep, maintenance and operational costs after it’s turned over to local officials.

The nation has spent lavishly on fixing the system in the seven years since Katrina flooded 80 percent of New Orleans and left 1,800 people dead.

Already, lightning has knocked out chunks of wall…

About Resilience, The New York Times
“…“Resilience thinking” is starting to shape how urban planners in big cities think about updating antiquated infrastructure, much of which is robust in the face of normal threats like equipment failures but, as was just demonstrated in the New York region, fragile in the face of unanticipated shocks like flooding, pandemics, terrorism or energy shortages. Combating those kinds of disruptions isn’t just about building higher walls: it’s about accommodating the waves…”

Xynthia Storm Devastation: A tragic French Example, Coastal Care
In the early hours of March 1st 2010, a well-forecasted storm named Xynthia swept through France with powerful winds of 160km/h 90 miles, leaving a trail of devastation, and 53 victims. About half the French death toll was attributed to marine submersion and breach of the dilapidated and too low sea walls of La Faute-sur-Mer and l’Aiguillon-sur-Mer, allowing waves and sea waters to flood the villages, trapping people in their homes…
“Modern mankind appears to be the only species on Earth whose propensity is to migrate its habitat counter-intuitively, solely ruled by will, preference, and or greed, against Nature’s evolution. Attempts to control disharmoniously the ultimately uncontrollable forces of Nature bear too costly a price for us, and future generations. The point of all discussions should remain focused on stopping unbridled urbanization and preventing avoidable deaths and the gushing influx of taxpayers money by replicating past mistakes or investing in palliative, political and unadapted quick-fix solutions.
“The definition of insanity is doing the same thing over and over expecting different results.” -Benjamin Franklin. May cease the insanity, as the Seas are rising… ineluctably.”