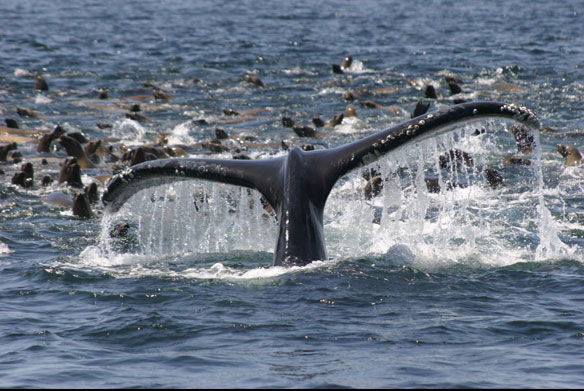 Some blue whales off the coast of California change their behavior when exposed to the sort of underwater sounds used during U.S. military exercises. The whales may alter diving behavior or temporarily avoid important feeding areas, according to new research…

Navy study: Sonar, Blasts Might Hurt More Sea Life
The U.S. Navy may hurt more dolphins and whales by using sonar and explosives in Hawaii and California under a more thorough analysis that reflects new research and covers naval activities in a wider area than previous studies.

A Rising Tide of Noise Is Now Easy to See, The New York Times
The oceanic roar originates because of the remarkable, and highly selective, way in which different kinds of waves propagate through seawater. While sunlight can penetrate no more than a few hundred feet, sound waves can travel for hundreds of miles before diminishing to nothingness. In recent decades, raucous clatter have been added to the primal chorus…